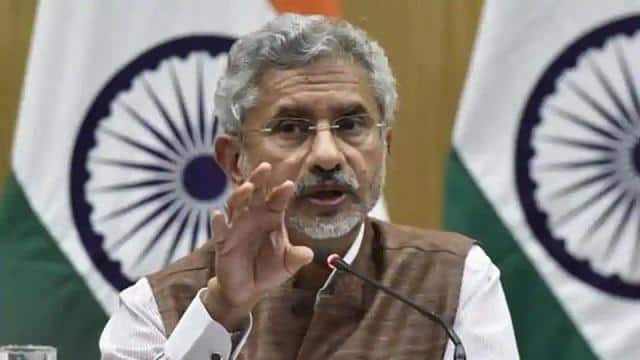 Foreign Minister S Jaishankar said on Friday that the presence of a large number of heavily armed Chinese troops along the Line of Actual Control (LAC) in eastern Ladakh is a very serious security challenge before India. Jaishankar said that violent clashes along the Indo-China border in the Ladakh sector in June have had a very deep public and political impact and have led to a serious upheaval in relations between India and China.

In the online program organized by the Asia Society, Jaishankar said, “A large number of soldiers (PLA’s) are present in that part of the border today, they are armed and this is a very serious security challenge before us.” On June 15, 20 soldiers of the Indian Army were killed in a violent skirmish in the Galvan Valley of eastern Ladakh, following which tensions between the two countries increased. People from the People’s Liberation Army of China were also casualties but it did not give a clear number.

Jaishankar said that India has built relations with China in the last 30 years and the basis of this relationship has been peace and tranquility along the Line of Actual Control. He said that since 1993 there have been a number of agreements which outlined the peace and tranquility that limited the military forces coming into the border areas, and determined how to manage the border and the troops stationed on the border How to behave when moving towards each other.

Also read- Terrorism continues from Pak, it is very difficult to normalize the relationship: Jaishankar

Jaishankar said, ‘So from the concept level to the level of behavior, the whole was a framework. Now what we saw this year was that this entire series of agreements were sidelined. The deployment of large numbers of Chinese forces along the border is clearly contrary to all this. He said, “And when there came a point of confrontation where a large number of soldiers came close to each other at various places, a sad incident like June 15 happened.”

Jaishankar said, “This brutality can be understood that this was the first incident of martyrdom of soldiers after 1975.” It has made a very deep public political impact and severely disrupted relationships. In response to the question of what exactly China did and why on the border, the foreign minister said, “I have not really got any rational explanation.”

At a special event of the Asia Society Policy Institute, Jaishankar interacted with the president of the institute and former Australian Prime Minister Kevin Rudd. The two also discussed Jaishankar’s new book ‘The India Way: Strategies for an Unsurpassed World’. He said that a similar summit was held in Chennai last year after the Wuhan summit in April 2018 and that the motive behind it was to spend time with Prime Minister Narendra Modi and President Xi Chinfing, talking directly to each other about their concerns. Do it Jaishankar said, “What happened this year was a really big deviation.” This was not only a very different approach from the conversation, but also a major deviation from the relationship that had lasted 30 years.

Pakistan wants to dodge FATF with these three hoaxes, know why it is difficult to get out of gray list