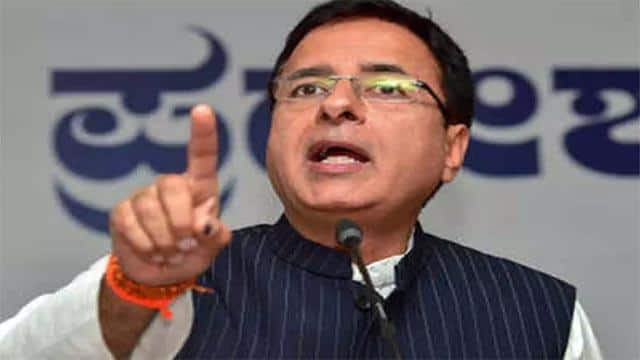 Jinnah Controversy in Bihar Election has started once again in Bihar Assembly Election. Congress (Congress) general secretary Randeep Surjewala termed it completely wrong on the question of Jale’s Congress candidate being Jinnah. Senior Congress leader and spokesperson Surjewala said that while being President of AMU, he wrote a letter to the Prime Minister asking for the removal of Jinnah’s statue from the AMU, Parliament and Mumbai High Court but it has not received a response till date. Surjewala hit back at the BJP and said that the President of the BJP (BJP) and asked questions on Jinnah’s tomb.

Congress candidate accused of being a Jinnah supporter
Let us tell you that Jinnah’s Jinn has returned in Bihar Assembly Elections 2020. Swords have been drawn in Congress and BJP over Jinnah’s Jinn. A round of political charges has started. In fact, a political battle has started in the Congress and BJP over the Congress candidate from Jale Assembly seat in Bihar, Muskur Usmani. The BJP has accused the Congress candidate of being a Jinnah supporter. Senior BJP leader and Union Minister Giriraj Singh has claimed that Usmani had photographed Jinnah while living in the Aligarh Muslim University Students Union. He created a lot of controversy when Jinnah’s photo was removed from this university. Jinnah’s picture was recovered from the office when the police raided him after his trial.

It is believed that this issue is being aired due to the sage Mishra being denied Congress ticket from the webs. Mr. Mishra has also asked to give a ticket to Gandhian instead of Jinnavadi, considering the seat of Jala. In a conversation with Hindustan on Friday, Union Minister Giriraj Singh questioned the Congress on which path it wanted to take the country. India never supported Jinnah. This move of the Congress made it clear that when has he left Gandhi’s path. He named Gandhi only to remain in power.

On the other hand, Bihar in-charge of Congress Shakti Singh Gohil and State Spokesperson Harkhu Jha have retaliated on Giriraj Singh’s statement. Shri Gohil has said that without taking the name of LK Avani, only big leaders of BJP are supporters of Jinnah. At the same time, Harkhu Jha has said that in the Lok Sabha elections, the BJP, which brought the leader of Hindu extremist organization from the historic city of Bhopal and accused Pragya of Malegaon scandal, to the temple of democracy in the Lok Sabha, first raised its ballot. BJP leaders who consider Nathuram Godse, the killer of the Father of the Nation, as their ideal, are not entitled to make unwarranted allegations.

What is the work of Jinnah in the country. Tell Congress and Tejashwi Yadav that their star campaigner will not be Jinnah. The way the Congress has made Jinnah’s supporter a candidate, will she ask for a vote in Jinnah’s name. – Giriraj Singh, Union Minister and senior BJP leader

Only big leaders of BJP are supporters of Jinnah. He went to Jinnah’s tomb. Returning from there, he also praised Jinnah. – Shakti Singh Gohil, Bihar incharge of Congress

Now preparations for action on NCB radar for drugs in Delhi, Mumbai style