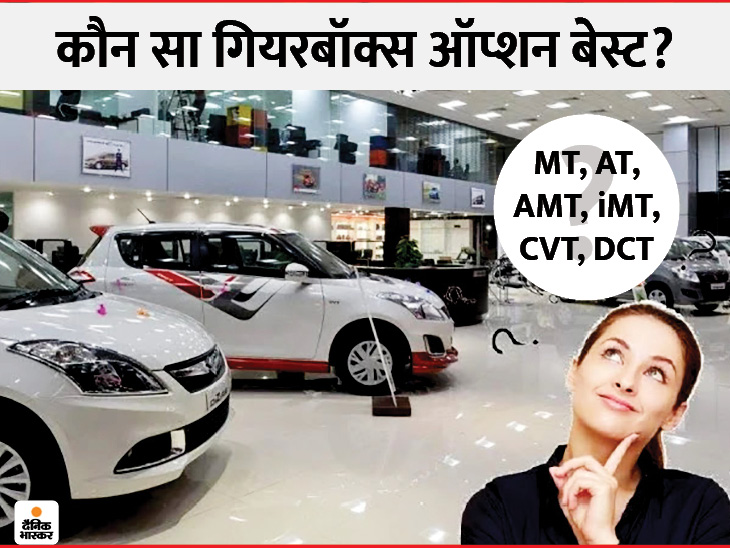 If you go to the showroom to buy the car, the executive counts many types of gearbox options in the same model, that this car has manual, AMT, IMT and DCT options will also be available. After that their characteristics are counted that if you go, you have to buy something else, but the purchase brings something else.

If you too are planning to buy this festive season car and are unable to decide which gearbox option is right for you, then here we have tried to explain in easy language what the difference between these gearboxes would be Is and according to use which option will be right to choose.

First of all, let’s talk about how many gearbox options are available in the market …

1. Manual (MT): It is a multi-speed gearbox, in which the driver himself decides when to shift the gear according to which speed. That is, to change the gear, the driver has to give his input as well as the gear lever, clutch, brake and accelerator all the driver has to operate.

2. Automatic (AT or torque converter): There is no manual input to this gearbox. In this, all the work is censored. The sensors themselves decide whether to change gears according to speed and RPM. It has a gear lever but you use it not to change gears but to drive, reverse, neutral and go into parking mode. It is worth noting that neither the clutch pedal nor the engine clutch in this gearbox. It does not have clutches, so it works quite fast and is also considered the most reliable.

3. Automatic Manual Transmission (AMT): Technically, it is a manual gearbox but clutch operations are done with the help of a special AMT unit. As we have said earlier, the traditional automatic gearbox (AT) does not have a clutch, on the contrary the automatic manual gearbox does not have a clutch pedal but the engine does have a clutch inside, which is automatic when the gear changes. The clutch will work with the help of the AMT unit. It has economical automatic technology, but being a clutch, it is slightly slower than the AT.

4. Intelligent Manual Transmission (iMT): The clutch operations in this gearbox are automatic but the gear driver has to be changed manually. This is a bit faster than the AMT, because the sensors in the AMT gearbox decide when to change gear and then the clutch works, but in iMT you are changing the gear yourself, then the clutch also starts working at the same time It is because of which it is fast. The clutch pedal is also not available in this.

5. Dual Clutch Transmission (DCT): As the name suggests, there are two clutches but both perform different automatic operations. One clutch takes care of the odd number gear ie 1,3,5 and the second one takes care of gear number ie 2,4,6, ie it has two clutch operations and this is why it works quite fast. . It is considered to be the fastest gearbox in the world of automatic.

6. Continuously Variable Transmission (CVT): There are no gears in it technically. In manual gearboxes where gear ratios are set and every gear ratios get fixed performance but CVTs do not have gear ratios at all. Steps are set inside it. It consists of two pulleys, which are connected by a belt or chain. It works according to the steps and increases the speed accordingly. Japanese use CVT the most.

In this way, decide which gearbox is useful for you …

1. Manual (MT)
This gearbox should go when you want the most reliable system, because we have had this gearbox ever since cars started making. In this, the entire system is under the control of the driver. It is also said that the less mechanical items, the more reliable that system will be because the less sensors and parts will be installed. If there are more sensors, the maintenance cost will also increase. Manual transmission does not have sensors, all the work has to be done by itself, so it is more reliable. This should be taken for those who want the highest mileage and the most reliable gearbox. It is also the cheapest.

3. Automatic Manual Transmission (AMT)
This is suitable for those who feel that the conventional automatic (torque converter) does not give much mileage. In the AMT you get slightly more mileage. The AMT Actuals only have a manual gearbox but a kit is fitted to do some of its operations automatically, so the mileage is found around the manual. This makes it a better option for those who need mileage as well as automatic, although it won’t get smoothness because the gear shifts are slightly jerky. If your vehicle does not have auto hold function, you need to be cautious while going uphill as there is a possibility of roll back as it takes some time to sit between the clutch and the gear. Fully automatic does not have this kind of problem because it does not have a clutch at all. If living in a ghat or mountainous area, AMT is better if neither is chosen.

4. Intelligent Manual Transmission (iMT)
This is better for those who do not have gear changes but have difficulty operating the clutch, especially with new drivers. It was first seen in Venue. Technically, it is a manual transmission, but the company has named it intelligent manual transmission, although only the clutch is operated automatically. It is smoother than AMT, because the gear is in your hand. It can be considered better than the AMT as well as it is cost effective as it has only the clutch, which works through the sensor.

5. Dual Clutch Transmission (DCT)
If you want to drive an automatic but need performance as well, then the DCT gearbox may be a better option for you as it works much faster. For example, in automatic, as soon as you press the accelerator pedal, the sensor takes a few seconds to give commands to the clutch and gears but in DCT it is negligible and hence the gears change rapidly as the speed increases and the speed decreases. Tend to gear down rapidly. As we have said, it has two clutches and hence it is also the fastest automatic gearbox. This is a good option for those who want sporty performance.

6. Continuously Variable Transmission (CVT)
According to experts, the more its construction is complemented, the easier it is to run, as well as reliable. However, there will be no speed like DCT but full automatic will be available. If you are thinking that you can get faster speed as soon as you press the accelerator pedal, then this will not happen in this system because it is not a gear ratio set. This is a good option for those who want more mileage rather than performance, as it gets more mileage than automatic (torque converter) and DCT.

Is it okay to decide according to budget whether to get manual or automatic?

Note- All Points based on interaction with Auto Expert Vikas Yogi.

1. The tension of bike-scooter is stolen, so leave worry, because this small gadget will not let your two-wheeler move from place to place.

2. Summer or rainy, the car umbrella will keep the car safe in all weather, ready-to-use in less than a minute

3. Now mechanic will not be able to make money by lying This small device will have to be installed in the car, the app will tell which part of the car is in the problem, will also give information about mileage

New feature of WhatsApp: Now tell any problem related to the app directly to the company, new in-app support feature released for Android users; Know the complete process of use