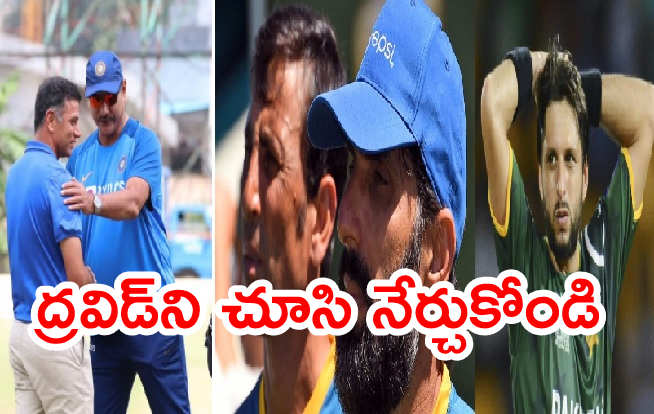 How to bring talented young cricketers to light ..? The former captain of Pakistan suggested that the legendary Pakistan cricketers should learn from watching former India captain Rahul Dravid. The communication gap between the Pakistan team management and the players has been coming up frequently for some time now. Recently, 28-year-old Mohammad Ameer said goodbye to international cricket for the same reason. It is noteworthy that the fast bowler said at the time of retirement that he was being tortured by the Pakistan team management. Commenting on Aamir Torture’s remarks, Afridi said, “It is not a good tradition. The board should create an atmosphere of harmony between the players and the management. The board should make it clear to the players about its plans. If a cricketer is to be dropped from the team, the head coach should talk to him and prepare mentally. Former cricketers Mohammad Yousuf, Inzimam-ul-Haq and Younis Khan are only interested in coaching the Pakistan team. But … otherwise they can do wonders if they focus on junior level players in the country like Rahul Dravid, ”Afridi said. Rahul Dravid, who coached the India Under-19 and India-A team, has brought to light many young cricketers. Rishabh Pant, Shubhman Gill, Prithviraj Shah, Washington Sunder and others who are playing in the Test series against Australia are Dravid’s disciples. Rahul Dravid is currently the head of the National Cricket Academy in Bangalore. Despite being invited by the BCCI to coach Team India, Dravid opted to coach junior cricketers.

Sourav Ganguly has another heart attack? Admission to Apollo Hospital

India vs Australia: T. Natarajan becomes the 300th player to make a Test debut for India

Doctor gives this update on Saurabh Ganguly’s health, will decide after report

Maharathi faces Mumbai in the final of the IPL