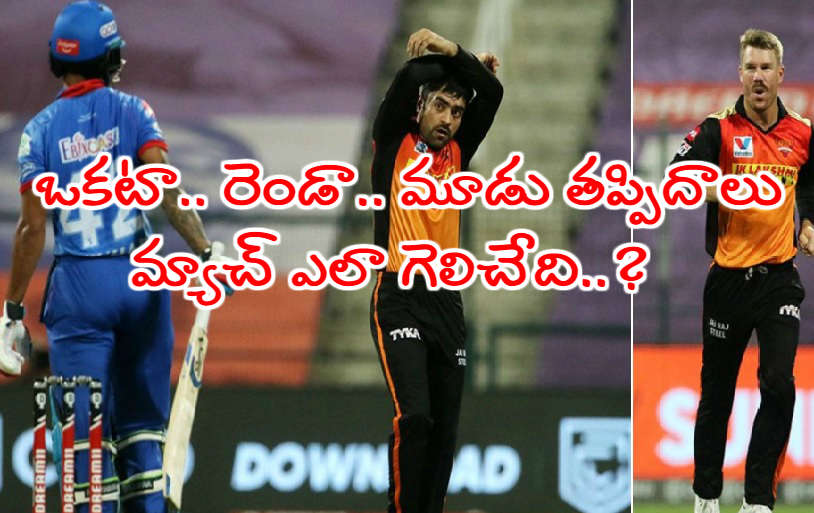 In the IPL 2020 Qualifier-2 match against Delhi Capitals on Sunday night, Sunrisers Hyderabad captain David Warner said that fielding errors had damaged their chances of winning. Hyderabad fielders dropped catches by Shikhar Dhawan (6×4, 2×6 off 78:50 balls), Stainis (5×4, 1×6 off 38 balls) and Simran Hitmeyer (42 not out: 4×4, 1×6 off 22 balls) who gave Delhi a better score. With that .. these three who were more excited gave the Delhi team a better score of 189 runs. 190 runs in Abu Dhabi, which is far from the boundary lines. Sandeep Sharma bowled the 3rd over of the innings and hit the Stoinis ball towards the silly midan. But as the ball swung exceptionally the shot did not connect as he expected. With that .. the ball bounced into the gall next to fielder Jason Holder. But .. he failed to catch the ball. By then the Stainis score was only 3. The next over was bowled by Holder, who hit three fours and a six, and remained in top gear until he was out again. Then in the 18th over of the innings Simran hitmeyer .. The yorker hit the ball towards the covers thrown by the bowler. Nadeem, who was fielding there as the ball bounced mostly into the gall, seemed to receive an easy catch. But .. Nadeem could not predict the movement of the ball and dropped it. In the 19th over of the innings, Rashid Khan surprisingly dropped an easy catch by Shikhar Dhawan. Shikhar Dhawan bowled by Sandeep Sharma .. hit towards deep mid wicket .. the ball went straight into the hands of Rashid Khan who was fielding at the boundary line. But Rashid Khan left in a hurry. Delhi Capitals reached the IPL final for the first time after winning the match by 17 runs. Delhi will take on Mumbai Indians in the title clash in Dubai on Tuesday night. “You can’t win matches if you can’t catch them. The loss of ground and adventure services due to injuries hurt the team, “said David Warner after the match.

Kapil Dev said to the loved ones, thank you, Admit was given in the hospital after a heart attack.