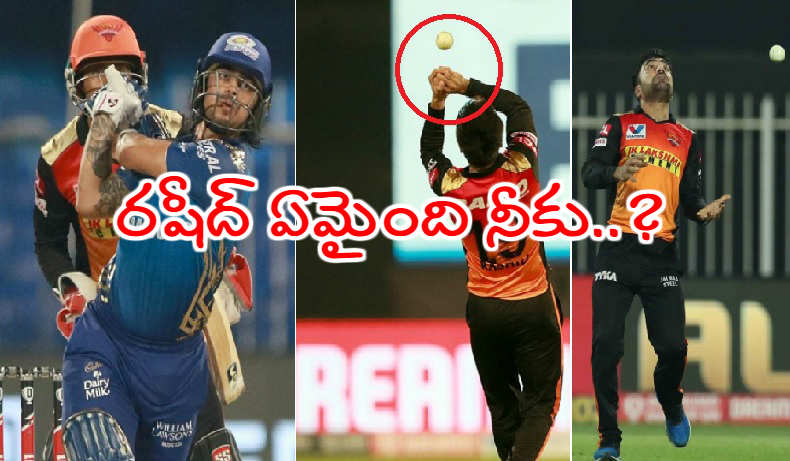 Sunrisers Hyderabad spinner Rashid Khan made an easy catch in Tuesday night’s match against Mumbai Indians as part of the IPL 2020 season. Rashid Khan, who is known not only as a spinner but also as an excellent fielder .. has received many dive catches at the boundary line and received books. But .. Rashid Khan took the catch given by Ishan Kishan in his bowling in Sharjah in reverse cup style and dropped it. In the end, Ishan Kishan (1×4, 2X6 off 33:30 balls) was the highest bowler in the Mumbai team and scored valuable runs. Ishant Kishan hit a huge six in the 9th over of Rashid Khan’s innings. He tried for another six in the 15th over of the innings. However, this time Ishaan bent his knee slightly and played a sweep as Rashid Khan put the ball to the left of the wicket. With that .. the ball that touched the top edge of the bat rose into the gall at the bowling end. However, Rashid Khan dropped the catch at the last minute and dropped it. The ball bounced out of his hand and landed. With that .. even Rashid could not believe that miss fielding for a few moments. Rashid Khan, who is fielding at the boundary line during the power play, runs fast and receives catches with good timing. Such is Rashid Khan .. The fans are surprised that he dropped the catch in his bowling. Rashid Khan, who bowled 4 overs in the match, took one wicket for 32 runs. Sunrisers Hyderabad won by 10 wickets and entered the playoffs.