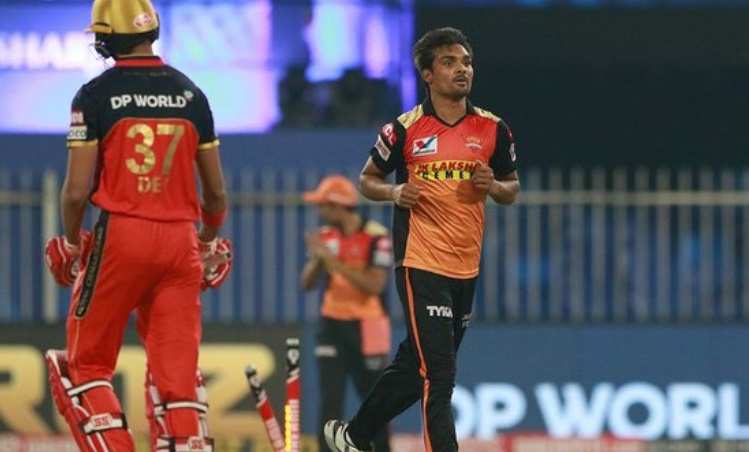 Sunrisers Hyderabad bowlers once again excelled collectively in the IPL 2020 season. Royal bowlers Bangalore Challengers Bangalore won the toss and elected to bat first. Opener Josh Filippi (4×4 off 32:31 balls) was the team’s top scorer. Hyderabad captain David Warner, who won the toss, opted for fielding as it was a must-win match to stay in the playoff race. With that .. Devadat Padikkal (1×4 off 5: 8 balls) and Josh Philippi (4×4 off 32:31 balls) started the Bengal innings and the pair tried for big shots from the start. Sandeep Sharma clean bowled in the third over of the innings. Virat Kohli (7: 7) also took the wicket. At this stage, AB de Villiers (1×4, 1×6 off 24 balls) tried to improve the Bangalore innings with Josh Philippi. Nadeem dropped an easy catch given by AB at individual score 4 .. finally got him out again and sighed. In the end, Washington Sundar (2×4 off 21:18 balls) and Gurkeerat Singh Mann (15 not out: 1×4 off 24 balls) were at the crease for a few overs but could not play fast. With Chris Morris (3) and Isuru Udana (0) also out, Bangalore had to settle for 120 runs.

CSK vs KKR: Noble immersed in Kolkata .. The match took a turn there

PAK vs ZIM: Pakistan won on the basis of Wahab and Shaheen, lead in ODI series

RCB vs CSK: Royal Challengers Bangalore would like to ensure playoff tickets

Sehwag congratulated VVS Laxman in his style, said – there was a different twist in his wrist.