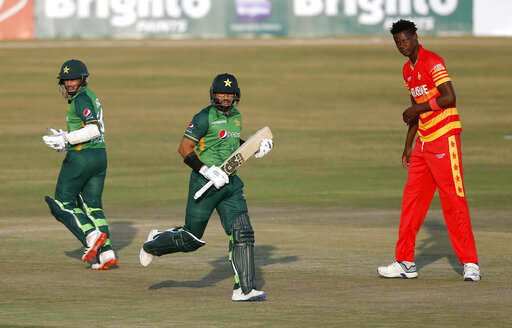 The Pakistan cricket team is a nickname for the uncertainty. In the third ODI against Zimbabwe at Rawalpindi, Pakistan, who had taken the match to a super over, lost badly. Former Pakistan fast bowler Shoaib Akhtar has come under fire. Akhtar suggested that the mentality of the players should change before history can be made. Zimbabwe won the toss and elected to bat first. Sean Williams (118: 135 off 13×4, 1×6) hit a century and scored 278 for six. The Pakistani bowlers, who initially restricted the top-3 batsmen Chari (9), Chibaba (0) and Erwin (1) to single digits, then erred. Along with Williams, Brendon Taylor (8×4 off 56:68 balls) and Raza (4×4, 1×6 off 45:36 balls) consistently gave Zimbabwe a 278-run lead. Later in the innings, Babur Azam (13×4, 1×6 off 125: 125 balls) and Wahab Riaz (3×4, 3×6 off 52:56 balls) played aggressively but could not finish the match. Babur Azam was out as Pakistan needed 13 off 7 balls to win. In the final over, Mohammad Musa made the first and last ball for four. But .. Pak was also limited to 278/9 with 4 runs scored in the middle four balls. With the scores tied, the Super Over was bowled out. Pakistan, who batted first, lost Iftikhar for the first ball, then took two singles off two balls and Kushti took the wicket for the fourth ball. With that .. Zimbabwe completed the three-run chase with a boundary in just three balls. With that .. Pakistan had to end the three ODI series 2-1. Shoaib Akhtar reacted strongly to Pakistan’s defeat. “It is a shame to lose to Zimbabwe. May lose in some matches .. may win in others. But .. it must be able to correct mistakes. The mentality of the players has to change before history can be made, ”Akhtar said.

IPL 2020: Chennai out of playoff race, what is expected for the rest of the teams

If caught at the boundary line ..? Kohli lip service over RCB defeat