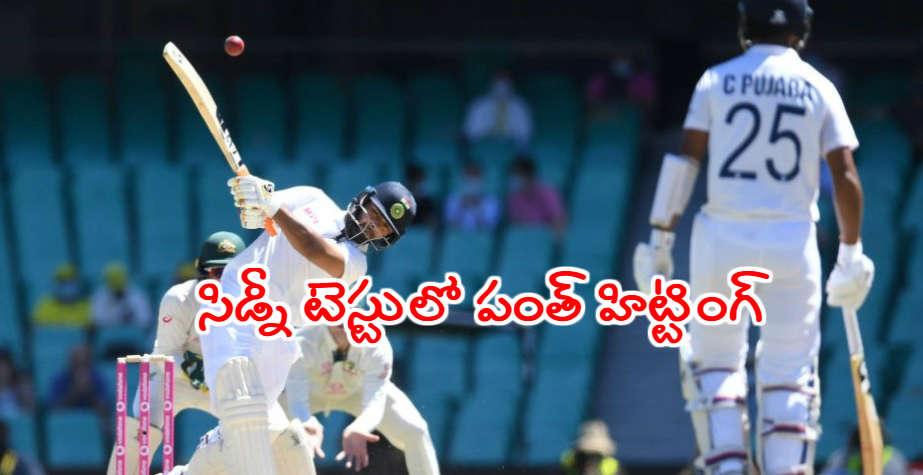 Team India will play Australia on the final day of the third Test in Sydney. The Indian team continued the second innings on Monday with an overnight score of 98/2 as part of the 407 – run target .. 206/3 at the lunch break. With 201 runs to go .. Victory (73 batting: 8×4 off 97 balls, 3×6), Chateshwar Pujara (41 batting: 5×4 off 147 balls). The duo, who effectively faced the Australian bowlers in the first session today, continue with an unbeaten 104 for the fourth wicket. Captain Ajinkya Rahane (4:18 balls), who continued batting today with an overnight individual score of 4, was bowled out by spinner Nathan Lion without adding a single run. Rishabh Pant, who later came forward in the batting order, batted slowly at the start and Pujara also played very cautiously as everyone felt that the Indian team was trying for a draw. But .. Rishabh Pant exploded with huge shots after getting stuck in the crease. Rishabh Pant, who came out of the crease in spinner Nathan Lion bowling and hit too many sixes .. Mitchell Starc bowled a cover drive and full shots. With that .. Pujara also started swinging the bat. With two more sessions left in the game .. at least 54 overs are likely to fall. Batting 36 overs in the first session, India lost wickets and scored 108 runs. In this Test which started on Thursday .. Australia scored 338 in the first innings .. India were all out for 244 in the first innings. With that .. Australia played the second innings with a lead of 94 runs today by declaring the innings at 312/6 and set a 407-run target ahead of India.

India vs Australia: Siraj gets emotional after taking 5 wickets against Australia

India in Australia: When 19-year-old Ishant showed his bully and Ricky Ponting was out

Penn said on racial remarks, wanted to make Indians feel that we are against it