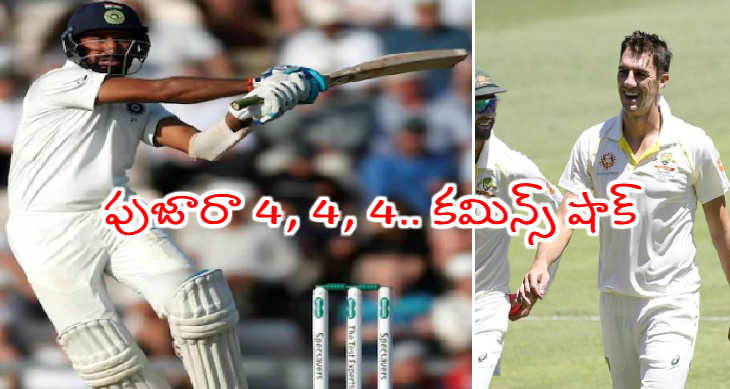 The Indian Test specialist batsman surprised everyone with a hat-trick of fours in the third Test against Australia in Sydney. Chateshwar Pujara, who is known for his slow innings, was bowled unexpectedly by Australia’s top bowler Pat Cummins in the 83rd over of the innings. Pujara, who had been defending or leaving the ball until then, could not believe even Pat Cummins for a few seconds hitting 4, 4, 4 in a row. Rishabh Pant (12×4, 3×6 off 97: 118 balls), who had been playing aggressively till then in the 407-run innings, was out. Chateshwar Pujara (12×4 off 77: 205 balls), who was in charge of the scoreboard, started batting. In the 83rd over of the innings, the first ball was bowled by Pat Cummins over the pitch. With that .. Cummins faced the second ball in the form of a short pitch. But .. Pujara did not back down this time and went to the backfoot and moved towards the boundary towards the point. Originally a new ball .. and then being a fast bowler the ball bounced like a bullet. Pujara, who also hit a boundary towards Midan, dominated the third ball at full strength. India were bowled out for 250. Then Chateshwar Pujara was dismissed for 272 in the fifth wicket. Pujara clean bowled a long delivery thrown by Pat Cummins on the wrong line. Pujara, who bowled 176 off the first innings with 50 runs at 28.41, was widely criticized. Former Indian cricketers have also spoken out against Pujara’s slow innings.

SRH: An unforgettable day for Natarajan .. Happy birthday .. Abby out to the eye-catching yorker!

Natarajan can be important for India in T20 World Cup: Kohli