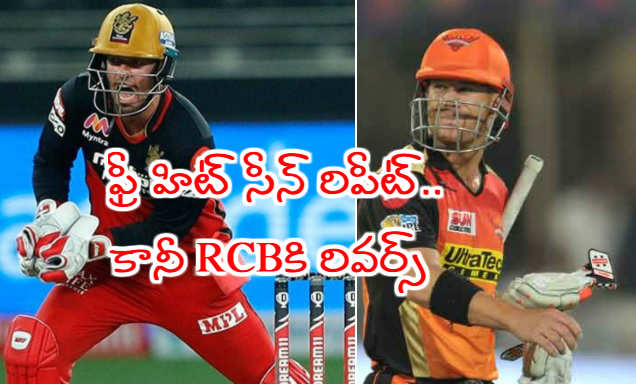 Royal Challengers Bangalore player AB de Villiers is undisputed in the IPL. No matter how many people have fascinated De Villiers in his long career .. he has never slipped his mouth. But .. for the first time he got into sledging on Sunrisers Hyderabad captain David Warner. Although it’s funny .. Netizens are of the opinion that they did not expect such words from de Villiers. Washington Sundar bowled the fifth over of the innings in the match. Warner hit the second ball of the over towards the cover point at the last moment. However .. with the fielder right there the ball went straight into his hands. With that .. Warner did not make any run. However .. Bangalore keeper AB de Villiers walked closer to the wickets anxious to get the ball back. The umpire declared the ball a no ball as his gloves touched the bails during the sequence. De Villiers alerted the fielders for a free hit as the legal delivery became costa noble due to him. Sundar threw the free hit ball in the same manner as before. This time Warner hit the ball towards Midan. There was fielder Padikkal in that place .. Warner tried for a single. With that .. Abby De Villiers was heard shouting loudly from behind the wickets to run and run out. But .. with Padikkal mis fielding, Warner finally finished the single. In the same match, Bengaluru batsman Moin Ali Langon hit the free hit ball and ran for a single. Rashid Khan, who received the ball well, aimed straight at the wickets and threw. Then there was Abby DeVilliers at the non-strike end. With that .. de Villiers hopes to repeat the same scene. But .. Warner successfully completed the single with a mistake by Padikkal. However .. Abby De Villiers finally got the catch of David Warner in Siraj bowling.

IPL 2020: Ben Stokes, who snatched victory from Mumbai’s jaws, said, Noise is not necessary for me

Mumbai Indians are the best in the world .. No franchise is unmatched: Brian Lara