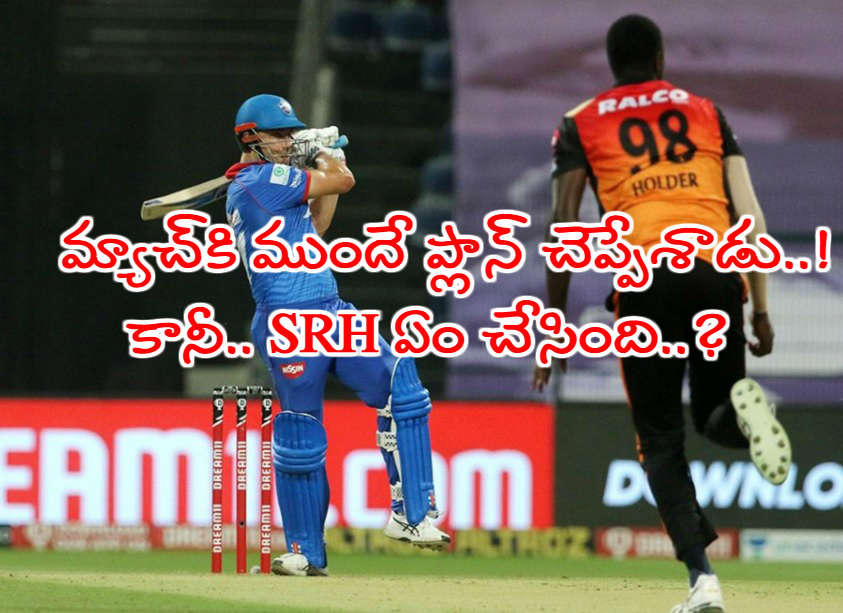 The day before the IPL 2020 qualifier-2 match against Sunrisers Hyderabad, Delhi all-rounder Marcus Steinis said the team game plan. The Sunrisers, who are on a winning streak with consecutive wins, have revealed that their plan is to play free from fear from the start if they want to beat Hyderabad. To this extent, he not only made suggestions to his teammates. Jason Holder’s omission of his catch in the third over also gave further impetus to the Delhi plan. Delhi Captains captain Shreyas Iyer, who won the toss in Sunday night’s qualifier-2 match in Abu Dhabi, chose to bat first as part of his plan. With that .. Stainis (5×4, 1×6 off 38:27 balls) started the Delhi innings with Shikhar Dhawan (6×4, 2×6 off 78:50 balls). Sandeep Sharma, who bowled the 3rd over of the innings, hit two fours in a row. After that, Jason Holder hit three fours and a six in the over. With that .. Shikhar Dhawan got the upper hand and he also played big shots .. By the end of the Delhi Capitals powerplay (first six overs) it was 65/0. After that, in the 8th over of the innings, Stainis was out. The aggression continued in the Delhi innings. Steinis continued the same momentum not only in batting but also in bowling. Manish Pandey (21) and Priyam Garg (17) took wickets in the fifth over of the innings. In the 17th over of the innings, Kane Williamson (67:45 off 5×4, 4×6) turned the Stainis match upside down. Delhi Capitals reached the IPL final for the first time after winning the match by 17 runs. Delhi will take on Mumbai Indians in the title clash in Dubai on Tuesday night.

IPL Playoff: This is how four teams play .. This is what unites the Sunrisers ..!

The real reason for putting Rohit Sharma aside has come to light ..!

IPL 2020: Come on … come and lead the team … Rohit Sharma who pushed the spinner forward