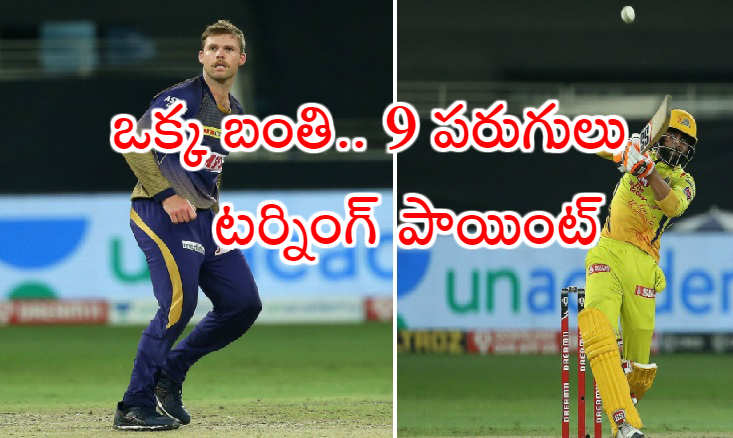 Kolkata Knight Riders lost the match due to a small mistake in the end. Chennai needed 30 off the last 12 balls to win the match at the Dubai venue on Thursday night. At this stage, the innings was bowled by Luke Ferrusen in the 19th over. In the first four balls, the pair scored just 7 runs. It also has a four and wide. With that .. the equation changed to 23 off 8 balls. So far the match is in the hands of Kolkata. But .. Ferguson faced the fifth ball of the 19th over in the form of a high full toss. With that .. Jadeja scored two runs for the ball .. The umpire declared Noble. After that, Jadeja converted the free hit ball into a six. He hit four for the last ball. With that .. Ferguson submitted 13 runs in the last two balls. Overall, the equation for the last over would have turned into 10 off 6 balls. In fact, the equation was 34 off 18 balls by the end of the 17th over of the innings. Cummins, who was met by excellent Yorkers in that over .. was able to push the Jadeja-Karan pair under pressure. With that .. in the next over Ferguson erred in rhythm in order to meet the Yorkers. Snow seems to be the main reason for the ball to slip out of his hand. Overall .. After six for the free hit ball the match exceptionally went into the hands of Chennai. Nagar Koti bowled three runs off the first four balls of the last over. Jadeja (31 not out: 2×4, 3×6 off 11 balls) made the last two balls as sixes.

Warner and Saha beat this, Kagiso Rabada got 54 runs in 4 overs, it happened after 3 years 117 days

Another new headache for Sunrisers before the playoffs .. so how ..?