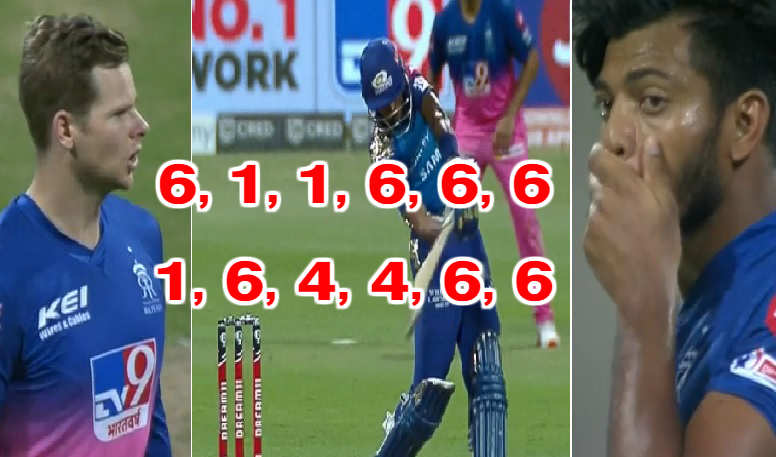 Mumbai Indians power hitter Hardik Pandya is playing the finisher role well in the IPL 2020 season. Hardik Pandya (60 not out: 2×4, 7×6 off 21 balls) hit two overs in the two-over match against Rajasthan Royals in Abu Dhabi on Sunday night. With that .. Mumbai Indians scored 195 runs for the loss of 5 wickets. But .. Ben Stokes (107 not out: 14×4, 3×6 off 60 balls) smashed an unbeaten century as Rajasthan Royals chased down the target with 2 wickets in hand with 10 balls to spare. Mumbai, who were 121/4 in 16 overs in the match, were expected to score 150 runs. But .. In the 18th over of the innings, Ankit Rajput bowled Hardik Pandya and the sky was the limit. The first ball of the over was bowled by Ankit Wide. Pandya then moved the ball for six and took a single for the second ball. Again Tiwary took a single off the third ball. After that Hardik Pandya made three balls in a row as sixes. With that .. Mumbai squeezed 27 runs in that over. Karthik Tyagi, who bowled the last over of the innings, was also bowled by Hardik Pandya with huge shots. Pandya hit three sixes and two fours in that over and scored 27. In this sequence, he reached the milestone of 50 off just 20 balls with six. Karthik Tyagi, Ankit Rajput and Rajasthan captain Steve Smith also sweated for a while after Hardik Pandya’s hitting.

3 posts 4 candidates: Ajit Agarkar, Maninder Singh, Chetan Sharma and Das in the race to become the selectors of Team India

Extra pressure on him in the absence of Virat Kohli: Ponting

Do you know PSL 2020 Prize Money? What is the difference compared to IPL?