CM Eknath Shinde : Come early next year, Ganesha is gone, we don’t want peace in the village. After 10 days of emotional worship, Bappa is being bid farewell to everywhere today. The festivity of Bappa’s immersion procession has started all over the state including Mumbai. Governor Bhagatsinh Koshyari, Chief Minister Eknath Shinde, Deputy Chief Minister Devendra Fadnavis today greeted the processions of devotees and public Ganeshotsav Mandal who came to immerse Ganesh idols on the occasion of Anant Chaturdashi at Girgaon Chowpatty in Mumbai. "Ganapati Bappa Morya, early next year…" With these announcements, the area went up in flames. The function of preserving our culture is through festivals. Speaking to the media, the Chief Minister said that this year the festival is being celebrated without restrictions and the enthusiasm of the devotees is overflowing."text-align: justify;">This year Ganeshotsav was celebrated in a restriction-free atmosphere after the outbreak of Corona. Governor, Chief Minister Eknath Shinde, Deputy Chief Minister Devendra Fadnavis arrived around 8 pm to greet the crowd of devotees who had gathered at Girgaon Chowpatty to bid farewell to Ganaraya. On this occasion, Mumbai Municipal Commissioner I. S. Chahal, Mumbai Police Commissioner Vivek Phansalkar welcomed him. Union Minister of State for Social Justice Ramdas Athawale, Women and Child Development Minister Mangalprabhat Lodha and other dignitaries were present on this occasion.

Governor Governor Bhagatsinh Koshyari, Chief Minister Eknath Shinde, Deputy Chief Minister Devendra Fadnavis greeted the Ganesh processions by showering flowers from the pavilion set up by the Mumbai Municipal Corporation here. He visited and inspected the Mumbai Police control room set up at Chowpatty and interacted with the staff there. Dr. who continuously implements social activities. He also visited the Nirmalya collection activity organized by Nanasaheb Dharmadhikari Pratishthan at Chowpatty.

Beloved Ganapati Bappa arrived on 31st August. Before that, preparations for the festival had already started for fifteen days. Markets are decorated with numerous types of decorative materials. In the alleys, stalls of gaudy and greedy idols of Ganara came up and the excitement of the festival grew. Ganapati Bappa Morya on 31st August! In this jubilation, Ganesha devotees, in a new enthusiasm, sought Sukhkarta, Vighnaharta, Bappa in houses and circles. After that, Ganpati Bappa was worshiped with enthusiasm for ten days. Mumbai, Pune, including Nashik across the state, devotees thronged to see the idol of Lord Ganesha. The atmosphere was full of Ganesha for ten days due to cultural programs, chanting of hymns, Ganesh Vandana, processions of traditional instruments, religious programs. Today is the last day of Ganeshotsav. Ganesha devotees have taken to the streets to bid farewell to their beloved Ganpati Bappa with heavy hearts.  Next year also, the devotees are going to bid farewell to Bappa by appealing to ‘come again with new consciousness.’ 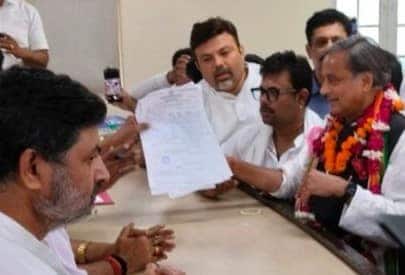