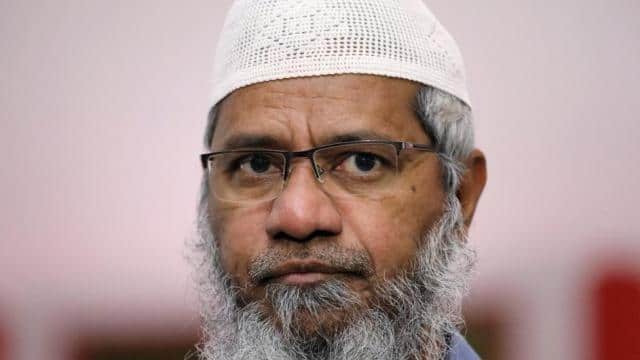 Fugitive Zakir Naik, known for his controversial statements, has once again supported the demolition of the Hindu temple in Khyber Pakhtunkhwa, Pakistan by spewing poison. Zakir Naik has said that there should not be temples in Islamic countries and if there are temples then they should be demolished. This shameful statement of Zakir Naik, who spewed poison from his mouth, on temples and idol worship is becoming very viral on social media.

Zakir Naik has said that it is forbidden to make any idol in Islam whether it is painting, drawing, or sculpture of a living animal bird or a statue of humans or birds or insects. All this is forbidden in Islam and there is many evidence of this.

Let us tell you that the incident of sabotage in a Hindu temple by a mob led by members of a radical Islamic party in Pakistan’s Khyber Pakhtunkhwa province has come to light. The temple had the tomb of a Hindu religious leader. The Hindu community had obtained permission from the local authorities to renovate the decades-old building of the temple. The mob, led by some local clerics and supporters of the Jamiat Ulema-e-Islam Party (Fazl ur Rehman Group), demolished the old structure as well as new construction work.

Poison has risen against the temple even before

In July last year, Zakir Naik reprimanded the Imran Khan government, saying that he had sinned by allowing the construction of a Krishna temple in Islamabad. He said that according to the Shari’a, it is forbidden for an Islamic nation to pay or donate to a non-Muslim worship house.

Rahul Gandhi accuses Modi government, says – for these the protesting farmers are Khalistani and the capitalist best friend

Shashi Tharoor said – Congress will be zero in the circle of BJP becoming light, explained through Pepsi-Coke