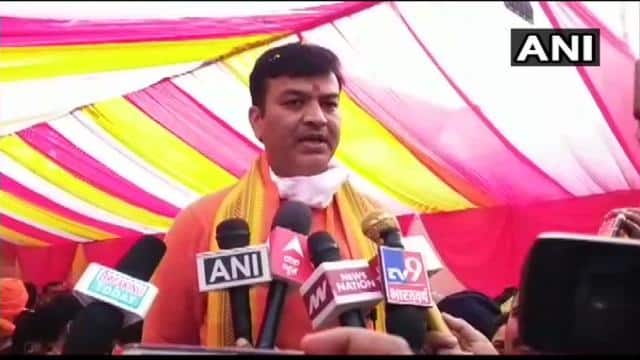 Uttar Pradesh Minister of State for Parliamentary Affairs Anand Swaroop Shukla, who is in discussion with his statements, has given a controversial statement about West Bengal Chief Minister Mamata Banerjee. Shukla said on Sunday that Mamta Banerjee has become a full-fledged Bangladeshi and is acting at the behest of Islamic terrorists.

Speaking to reporters, Anand Swaroop Shukla said, ‘Mamta Banerjee has become a full-fledged Bangladeshi and is working on the directions of Islamic terrorists. They have become the biggest threat to the country. They (Mamata Banerjee) should be ready to take refuge in Bangladesh after the defeat in the West Bengal assembly elections.

Mamata Banerjee has become complete Bangladeshi & is working on the directions of islamic terrrorists there. She has become the biggest danger for the country. After her defeat in West Bengal assembly elections, she’ll be ready to take refuge in Bangladesh: State Min Anand S Shukla pic.twitter.com/b6dEvzyZQn

Shukla said that she is making ration cards only for Rohingya Muslims and people from Bangladesh. His defeat in the Assembly elections to be held this year is certain. NRC will be implemented vigorously in the state when our government is formed.

It is not that Anand Swaroop Shukla has made a controversial statement for the first time. Earlier, he had also given a controversial statement about Maulana Abul Kalam Azad, the freedom fighter and the country’s first education minister. In December last, he said that Abul Kalam Azad had no place in his heart towards India and Indianness. He had said that where people did not want to create Pakistan, Pakistan was created and where people had voted more for the formation of Pakistan, they remained in the country. Even after Education Minister Abul Kalam Azad, people like MC Chagla, Nurul Hasan and Humayun Kabir have damaged India’s education system.

Tejpratap claims, BJP and JDU are fighting in Bihar, Tejashwi will be the next CM