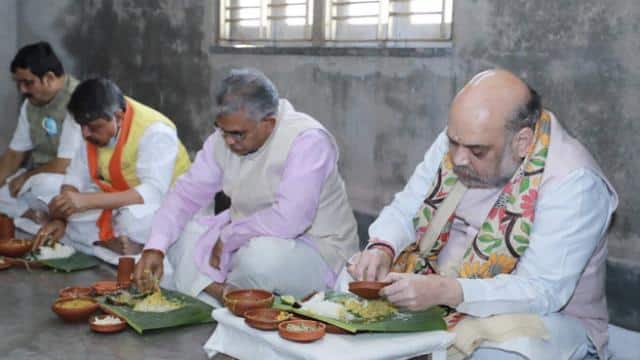 Amid the Bihar assembly elections, Amit Shah, the Home Minister and BJP’s Chanakya, is engaged in executing ‘Mission Bengal’. The BJP, which is hoping to wrest power from Mamata Banerjee in next year’s Vidhan Sabha elections, is preparing the BJP for Shah Mahamukabale. On the second day of his tour of West Bengal, Shah worshiped Dakshineswar Kali and also reached the residence and institute ‘Shrutinandan’ of classical singer Pandit Ajay Chakravati in South Kolkata. He served the day for a Bangladeshi refugee from the Matua community.

In such a situation, the Matua community has once again come under discussion. Mamata Banerjee has also tried to make this community happy by giving a gift a day earlier. After all, who are the matuas and why are they so important in Bengal politics? Before answering these questions, also take a look at Mamata Banerjee’s announcements. Mamta Banerjee made several big announcements for the tribal and Matua communities on Wednesday. The state government entrusted the right of land to 25 thousand refugee families and said that 1.25 lakh families would benefit from it. Mamta Banerjee allocated Rs 10 crore for Matua Development Board and Rs 5 crore for Namasudra Development Board.

Grateful to the Biswas family for being such a great host. Will always remember their love and affection that they have shown towards me. pic.twitter.com/A59GuopBEs

Matua community’s importance in Bengal politics
During the Lok Sabha elections last year, Prime Minister Narendra Modi started the Bengal election campaign with blessings from 100-year-old monastery Boro Maa Binapani Devi of the Matua community. The Scheduled Caste Matua community, who came as a refugee from Bangladesh, has a good influence on 40 assembly seats. Defeat victory in 8-10 seats around North 24 Parganas depends entirely on this community. The people of Matua community supported BJP in the 2019 Lok Sabha elections and a BJP MP from this community also reached Parliament. Before the 2021 assembly elections, the BJP is trying to convince the community that the Central Government is committed to grant them citizenship through the amended citizenship law.

Tribal voters too
On Thursday, Shah had a meal at Chaturdihi village in Bankura district of West Bengal at the home of a BJP tribal worker. The BJP is focusing on Matua and tribal voters for the upcoming election. Their stance is very important for victory in the assembly elections.

BJP and TMC fight in 2019
During the 2019 Lok Sabha elections, the BJP had a good lead on 33 of the 68 assembly seats with influence from the SC community. Of these, 26 are dominated by the Matua community. Mamta Banerjee’s party was ahead in 34 seats and thus there was a contest between the two parties. Similarly, BJP led in 13 out of 16 ST Assembly seats, while TMC was ahead in only three seats.

Who are the people of Matua community
In the 2019 Lok Sabha elections, BJP had given the ticket of Bongo’s grandson Shantanu Thakur from the Bongan Lok Sabha seat.
BJP won this seat for the first time. The Matua community has its roots in East Pakistan or existing Bangladesh. Born in 1918 in Barisal district of undivided Bengal, Binapani Devi is called ‘Matua Mata’ or ‘Boro Ma’ ie (elder mother). He started this sect. She was married to Pramath Ranjan Thakur. After independence, she moved to West Bengal with the family. The number of followers of Matua sect is very high in West Bengal. Many members of Matua Mata’s family have been associated with politics. Sometimes Congress and sometimes TMC and now BJP has family ties. Matua Mata Binapani Devi passed away on 5 March 2019.

The family has an old political alliance
Mamta Banerjee also had the support of the Matua community in demolishing the left fort. In 2010, Mamata Banerjee’s closest mother was raised by Binapani Devi. On 15 March this year, Mamata Banerjee was declared the patron of the Matua sect. In 2014, Kapil Krishna Thakur, elder son of Binapani Devi contested the Lok Sabha election from Bangaon on a TMC ticket and reached Parliament. Kapil Krishna Thakur died in 2015. His wife Mamta Bala Thakur became MP from here in the by-election. After the demise of Matua Mata, his younger son Manjul Krishna Thakur joined the BJP. His son Shantanu Thakur is currently a BJP MP from Bangaon.

Why are the Muslims of the world angry with French President Emmanuel Macron? Ruckus in Islamic countries, boycott of goods