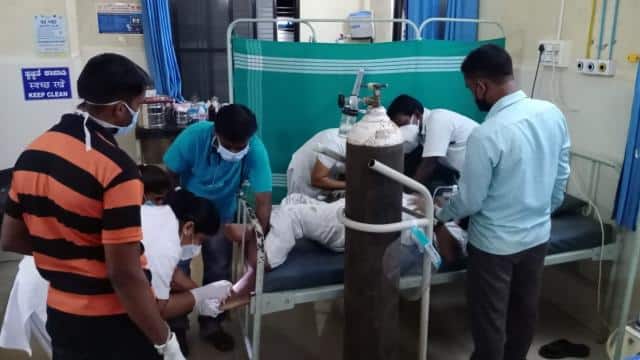 Union minister Shripad Naik’s SUV has become a victim of a road accident in Karnataka, in which his wife and assistant died. Shripad Naik has also been injured in the accident, but his condition is now said to be stable. His vehicle crashed near Ankola in Uttara Kannada district while returning to Goa from a shrine in Karnataka. After primary treatment in Ankola itself, he has been shifted to Goa Medical College. The Chief Minister of Goa, who arrived at the hospital, while talking to the media late at night, said that the Union Minister is out of danger and his health condition is stable. He said that the Union Minister will have two small surgeries tonight.

Naik, along with four members of his family, had gone to the Ganapati temple in Yelapur in the morning and left for Gokarna around 7 pm after offering prayers there. His car from NH 66 took off on a thin road in the direction of taking a shortcut to Gokarna. It is being told that the road condition was very bad and the driver did not have control over the car, due to which the accident occurred.

A police officer said that this is not a case of collision of vehicles. He said that it seemed that the driver could not control the car and she overturned. Shripad Naik’s wife Vijaya died on the way to the hospital due to a serious head injury. The assistant died in the hospital.

Karnataka: Union Minister Shripad Naik & his wife injured after his car met with an accident near a village in Ankola Taluk of Uttara Kannada dist. They were enroute Gokarna from Yellapur when the incident took place. They’ve been treated to a hospital. A Police case registered. pic.twitter.com/ABMdx9ewoC

Defense Minister Rajnath Singh has also spoken to Goa Chief Minister Pramod Sawant and asked him to provide better treatment. Rajnath Singh said in a tweet, “I am shocked and extremely saddened by the news of Minister of State for Defense Shripad Naik being injured in a road accident.” I have a conversation with Goa Chief Minister Pramod Sawant. The State Government is properly managing Shripadji’s treatment. Pray to God that Shripadji is healthy soon. Sources said that Singh also discussed with the Chief Minister of Goa the option of bringing Naik to Delhi for better treatment if needed.

Many other leaders have mourned the death of the union minister’s wife in the accident. Delhi Chief Minister Arvind Kejriwal has said in a tweet that I am sad to hear the news of Vijaya Naik’s demise in an accident. Pray for an early recovery in the health of Union Minister Shripad Naik. Please tell that Shripad Naik is the Union Minister of State for Ayurveda, Yoga and Naturopathy as well as the Minister of State for Defense.

During the visit of JP Nadda to Bengal, the body of another BJP worker was found hanging, the party accused TMC of murder

Amit Shah said in West Bengal – CAA rules to be made, will be considered after vaccine arrival

IND vs AUS: Captain Virat Kohli, who was happy with the victory, did not mention Jadeja’s performance of this player