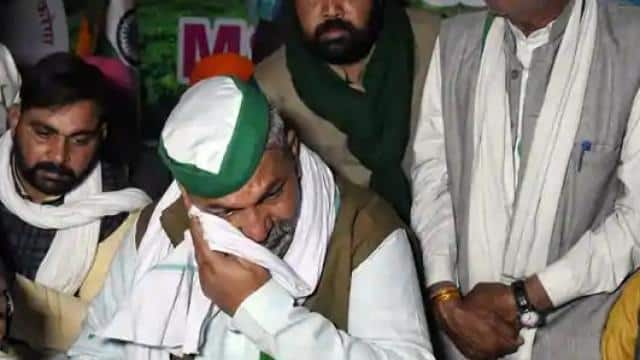 Peasant movement The Indian Farmers Union (BKU) leader Rakesh Tikat’s sentiment about the dwindling situation of UP has also sent a sentiment to the farmers of UP and has revived the performance. For Rakesh Tikait, who is agitating against the new agricultural law, people have arrived at the protest venue carrying water, paratha, buttermilk and pickles in an earthen pot. At the same time, Tikait urged the central government to restore internet services on Saturday.

A boy from a village in Ghaziabad rushed to the agitation site carrying homemade parathas and pickled tiffin with water. Some villagers from places like Muzaffarnagar, Greater Noida and Meerut in western Uttar Pradesh also reached the Ghazipur border with water and buttermilk in an earthen pot to feed the protesters.

Explain that after giving an ultimatum to the agitating farmers on the movement on the Ghazipur border to end the agitation, the supply of electricity and water was also stopped by the local administration. After which Tikait had said that he would drink water only when the farmers would come from their village and continue the agitation.

Actually, when Tikait got the Ultimate from the administration, he got emotional and started crying. Tikait said that instead of ending the movement, he would commit suicide. Tikait alleged that a conspiracy was being hatched to weaken the peasant movement.

Many farmers, including Pankaj Pradhan (52), head of Charaura village in Bulandshahr, said in a conversation with PTI, “People in our village did not sleep overnight. How could we sleep? His emotional touch touched our heart. On the same night, we started going to Ghazipur border, the venue for giving water to Tikaitji. Seeing their tears, we also had tears.

Gyanendra Singh, who came to the protest venue from Bulandshahr on Saturday, said that he too became emotional after seeing Tikait being emotional. He said, it was not his tears alone, it was the tears of all of us struggling farmers. So I decided to come here again. I am The Republic Day The tractor had gone back after the parade, not because I had lost faith in the movement after the unfortunate incident on Tuesday, rather we had only come for the parade.

Corona breaking into havoc in Delhi, 1759 patients died in November so far