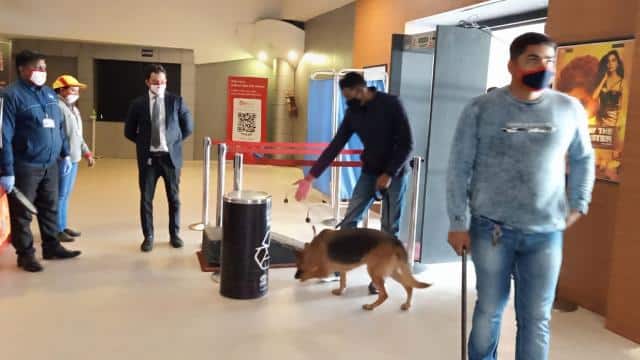 Kanpur Mall has received threats to blow up after reports of a bomb in the malls of Prayagraj and Varanasi in UP. In 24 hours, police in UP has been in a tizzy with the information of bomb in five districts. In addition to Prayagraj, Varanasi, Kanpur, bomb was reported in Sector 63 of Noida. Earlier on Thursday afternoon, Kailash Hospital in Noida was threatened with blowing up. It is a matter of relief that at present no explosives or objectionable items have been found from anywhere.

Kanpur: Madam Chief Minister will explode after the film’s show
The Madam Chief Minister’s show at South X Multiplex, Miraj Cinema, Gurudev, Pammi in Kanpur will have a blast sometime later. No one will be left. On Friday around 12 noon, the Kanpur police and UP police received a tweet regarding this in the name of Suryavanshi Badshah. BDS and Dog Squad teams reached all malls and theaters and were investigated.
Immediately the movie was stopped and the people returned and investigated. SP South Deepak Bhukar said that a tweeter has threatened to bomb three theaters including South X, named Suryavanshi Badshah. The tweeter is being tracked. Investigations are being conducted in malls and theaters for security.

The afternoon show at Gurudev Palace was attended by 9 and Pammi Palace at 19. Suddenly police arrived from Kalyanpur police station and stopped the show. All spectators were asked to go out. The show began after a search for the dog squad. DIG Dr Preetinder Singh said that false rumors of the bomb were spread in South X Mall etc. from Twitter Handel @suryavanshi Bad1. In the said case, a case has been registered against the tweeter at Juhi police station. Surveillance, cyber cell and crime branch are investigating.

Mall in Prayagraj evacuated at PVR after bombing
The police also received information about the bomb in Prayagraj’s PVR by tweet. In a hurry, police officers arrived on the spot and all the customer shopkeepers present in the mall were taken out. Police officers also called for a fire brigade to deal with any situation along with the bomb disposal squad. The whole mall started to be rumored. SP City Dinesh Singh reached PVR with a force of several police stations and evacuated PVR with full security arrangements. All shops were closed and people were evicted. The traffic police was deployed for this to keep the traffic system running smoothly. The bomb disposal squad, which arrived at 1:00 pm, began the investigation. On one side, the investigation was going on, on the other side, the police were busy telling mock drills to avoid any chaos. This led to a gathering of people around PVR. On seeing the police, people kept taking videos and photos from mobile. 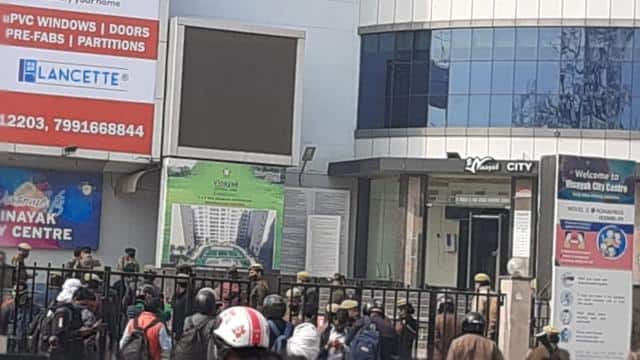 Bomb notice at JHV Mall in Varanasi
The police got information about placing a bomb in JHV Mall located in Cantonment of Varanasi. On the direction of SSP, heavy force and bomb disposal squad reached with CO Cantt. Police along with bomb disposal squad and dog squad searched the house. At present, explosives or anything objectionable was not found till two and a half hours. Here also the police was informed through tweet. According to SSP Amit Pathak, the tweeter is being identified.

It was reported in the morning that there is something like blast material here (Noida Sector-63). After which we reached here and laid siege to the whole area and removed the people. Our BDS team clarified that these are not explosive materials. Taking it for investigation: Police Commissioner, Gotam Budhnagar #Noida pic.twitter.com/7vJFmCnRS6

The bomb was reported at the Kailash Hospital in Noida
Earlier on Thursday afternoon, police had reported the bomb at Kailash Hospital located in Sector-27, Noida. Police, dog squads and bomb disposal squad conducted a thorough investigation in the hospital after receiving information on the spot. The breath of the people present in the hospital remained stuck during the investigation for about two hours. After the investigation, when the policemen told that everything was fine, the doctors, hospital management and police administration along with the people breathed a sigh of relief.

BSP state president Bhim Rajbhar’s strange statement- drinking toddy will not cause corona, its drop even pure from Ganges

Bihar Panchayat Chunav: Commission directive, all BDOs will have to give a certificate of correct voter list

Hasina Begum, who has been in jail in Pakistan for 18 years, returned to India, said – I feel like I have come to heaven