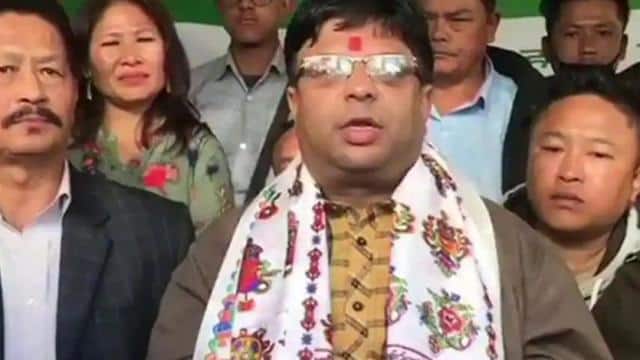 Assembly elections are due in West Bengal next year and all parties are engaged in making their electoral process. Meanwhile, Roshan Giri of Gorkha Janmukti Morcha (GJM) faction attacked the BJP and said to support the TMC. He said on Sunday that he would bring back Chief Minister Mamata Banerjee. She said that Mamata is separate from BJP and she fulfills her promises. Roshan Giri alleged that the BJP betrayed the faction from 2009 to 2020 and failed to live up to any of its promises.

Talking to news agency ANI, Roshan Giri said, “We have decided to defeat the BJP which betrayed us. They did not meet any of our demands from 2009 to 2020. We will support Mamata Banerjee in North Bengal. We want to see him as CM for the third time. She keeps her promises. ”

During a rally in Darjeeling region, Giri said that the BJP governments had assured the Gurkhas before three consecutive Lok Sabha elections that the political crisis in the hills would be resolved, but nothing was done. “In fact, they do not have the political will to find a lasting political solution,” he said.
He said, “Why does the Center make trilateral talks a pre-requisite when the Gorkhas arrive? The trilateral talks were not required for the creation of Telangana, Jharkhand, Chhattisgarh and Uttarakhand. They say the Gorkhas suffered 15 years of damage due to the BJP In October, the GJM led by Gorkha leader Bimal Gurung quit the NDA and aligned with the TMC, saying the BJP “failed to find a lasting solution” for the hills.

Giri also clarified that the GJM is not giving up its demand for Gorkhaland and will support the party in the 2024 Lok Sabha elections, which will accept our demand for a separate state. He denied any reconciliation with the Binoy Tamang faction, claiming that Gorkhaland Territorial Administration chairman Anit Thapa and GJM leader Binoy Tamang had no base in the hills. Giri accuses him of being involved in financial mess

Three Jhano plans of Jio cheap from Rs 250, data and calling up to 2GB daily

Bihar election: Voting for 94 seats of second phase tomorrow amid tight security, decision of many veterans including Tejashwi-Tej Pratap will be decided