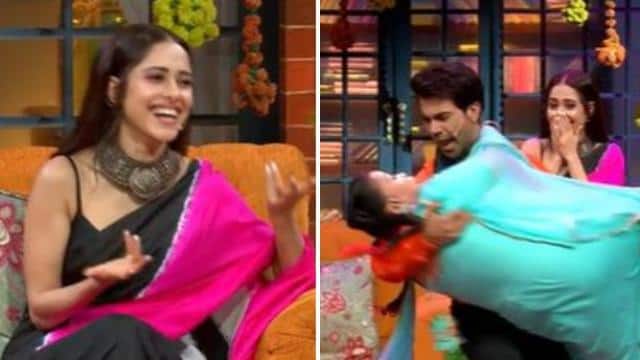 Rajkummar Rao and Nusrat Bharucha are coming as guests on TV’s popular comedy show ‘The Kapil Sharma Show’. He has reached Kapil’s show to promote the film ‘Chalang’. A video of ‘The Kapil Sharma Show’ is becoming increasingly viral on social media. In this, Rajkumar Rao is seen walking around with comedian Bharti Singh on his lap.

In the video, Rajkumar is shocked when he lifts Bharati on his lap. Bharti then knocks the prince over and pushes him. At the same time, Kapil Sharma is seen healthy flirting with actress Nusrat. Kapil says that the neckpiece in your neck is very beautiful. Nusrat says thank you. Then Kapil asks whether it is worn around the neck or is it stuck?

After this, Bharti Singh tells Nusrat that I too wanted to grow up and become an actor of the top. At this point, Kapil asks them, why not be made again? To this, Bharti answers where she grew up, widened.

After becoming a mother, Sapna Chaudhary shared photos, vermilion in demand and Mangalasutra in her neck.

Let me tell you that the film ‘Chalang’ directed by Hansal Mehta is ready for release on OTT platform on 13 November.