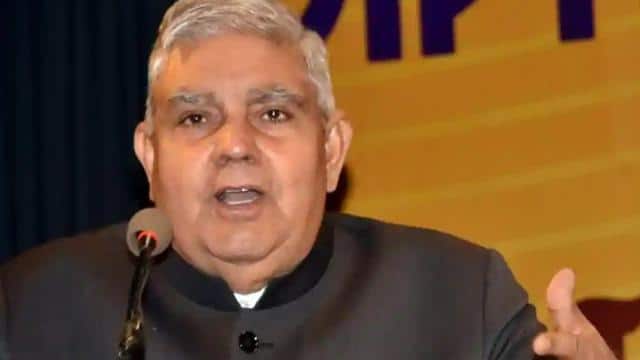 Taking a sarcasm at Gorkha Janmukti Morcha (GJM) chief Bimal Gurung, West Bengal Governor Jagdeep Dhankhar on Sunday said that the fugitive of the law is also a fugitive for society. Gurung was recently seen dramatically in Kolkata after absconding for three years on charges of murder and crime under UAPA.

The Governor said during a month-long visit to Darjeeling at a press conference, there will be a problem in the society unless everyone is equal before the law. On being seen by the leader of Gorkha Janmukti Morcha, he said, the fugitive of law is also a fugitive for society.

The Governor’s visit to Darjeeling comes at a time when Gurung has announced that his party will withdraw its support from the NDA. Gurung has spoken of supporting the Trinamool Congress in next year’s assembly elections. The governor has been on a month-long Darjeeling visit since Sunday. He said that the purpose of his visit is to ‘know the ground realities’.

The governor said that the people of the state are paying the price of such a fight between the Center and the Trinamool Congress government which can be avoided. He told reporters that the central and state governments are two wheels of development and should be worked with ‘collaborative federalism and joint action to help the people’.

He said, the epidemic has exposed the health structure of the state government. It would have been good if the government adopted the Ayushman Bharat scheme. … Unfortunately, the people of the state are paying the price for lack of foresight and avoidable confrontation. The governor said that under the Pradhan Mantri-Kisan Samman Nidhi scheme, the central government sent an amount of Rs. 12000 directly to the account of every farmer in the country, but the people of the state were deprived of this benefit. He said, this is the result of wrong policy, inaction and confrontation with the center. Dhankar also condemned the ‘rising crime against women in the state’.

Bihar Chunav: Polling for 78 seats of 15 districts in third phase tomorrow, fate of 1204 candidates including 11 ministers will be decided

LIVE: Voting continues for Greater Hyderabad Municipal Corporation election, will BJP be able to demolish the fort of Owaisi?