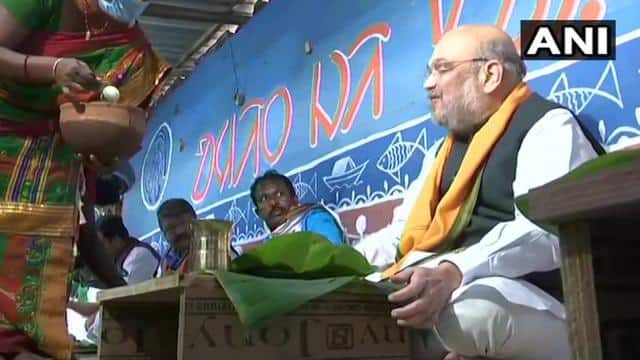 Union Home Minister and veteran BJP leader Amit Shah is on a two-day tour of West Bengal. During this tour, Amit Shah targeted Mamta Sarkar. At the same time, apart from this, he also ate food while meeting a tribal family. Shah met this in Chaturthi village in Bankura district.

Home Minister Amit Shah sat on the ground and ate food on the ground during a meeting with the tribal family. He was also seen sitting on the cot with other leaders. Several other party leaders were also present during Shah’s meeting with tribal family. It is noteworthy that Bankura is a district with a tribal and backward community population and it is one of the districts where BJP made a deep inroads in the 2019 Lok Sabha elections.

Earlier, Shah attacked the Mamata government saying that he was feeling a lot of anger against the Mamata Banerjee government of West Bengal and the downfall of this government had begun. Shah called upon the people to give BJP a chance to form the next government to materialize Sonar Bangla’s dream. After garlanding the statue of the revolutionary Birsa Munda, Shah told reporters, “Since last night I am in West Bengal and I can feel the great resentment of the people against Mamata Banerjee.” We are confident of bringing change in the state under the leadership of Narendra Modi. “Shah, who visited West Bengal on a two-day visit, criticized the Trinamool Congress government for the” killing “of BJP members.

Shah has arrived to take stock of election preparations

Shah arrived in Kolkata on Wednesday night to take stock of the preparations of the party organization in view of the assembly elections to be held in the state in 2021. He underlined that West Bengal is a border state and the security of the country is attached to it. Shah, who visited Bankura, was accompanied by BJP state president Dilip Ghosh, national general secretary of the party Kailash Vijayvargiya, national vice president Mukul Roy.

Those coming to Maharashtra from Delhi, Rajasthan, Gujarat and Goa will have to show Corona’s negative test report