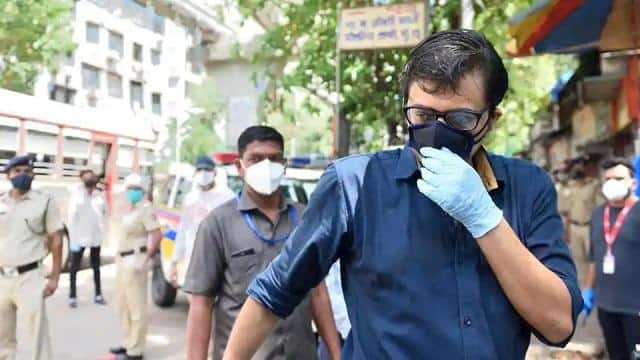 Arnab Goswami, editor-in-chief of Republic TV, was arrested by the Mumbai Police from his home on Wednesday morning in connection with the suicide of an 53-year-old interior designer and his mother. The Republic News Channel claims that Arnab has been arrested in a case that has already been closed. At the same time, the statement of the Shiv Sena and Congress has also come on the action of the police against Arnab. Shiv Sena leader Sanjay Raut has not arrested Arnab Goswami under the sentiment of revenge. At the same time, the Congress has termed Arnab’s arrest as a tribute to the late Anvay Nayak.

Asked whether the police action on Arnab Goswami was done with revenge, Sanjay Raut said that the government of Maharashtra never takes action with revenge, Maharashtra is the rule of law. If the police has any evidence in the investigation, then the police can take action on anyone. He further said that the kind of slander campaign that the channel had run against all of us had made false accusations. We have said that if someone makes a false accusation, it should also be investigated.

Maharashtra Congress general secretary and spokesperson Sachin Sawant described Arnab’s arrest as a tribute to the late Anvay Naik. He said, ‘Anvay Naik and his mother were forced to commit suicide after failing to pay arrears of Rs 80 lakh by Arnab Goswami’s channel.’

Know what is the matter of 2018, which led to Arnab’s arrest

He alleged that the then Fadnavis government in Maharashtra failed to investigate the matter and bring justice to the family of the deceased. There was a lot of political pressure and the then Fadnavis government pressed the case for obvious reasons. He alleged that the Modi government was defending Arnab because his channel was taking forward his agenda. Instead of condemning the action against the culprit, the BJP should feel ashamed of its failure to deliver justice. For the Naik family. We welcome the action taken by the Government of Maharashtra.

Inspector General of Police (Konkan Range) Sanjay Mohite confirmed that Arnab Goswami has been arrested by the Raigad police. However, he declined to provide more details. Arnab is being taken to Alibaug and will be produced before a local court later today. It is being told that Arnab has been arrested under Section 306 of the IPC for abetment in the alleged suicide of designer Anvay Naik and his mother Kumud Naik. In a letter written before the suicide in May 2018, Anvay Naik alleged that Arnab Goswami did not pay after the interior design of Republic Network’s studio.

What is the whole matter
53-year-old interior designer Anvay Naik and his mother Kumud Naik were found dead in May 2018 at their farmhouse in Kavir village in Alibag taluka. Anvay was found dead on the first floor, while his mother’s body was found on the ground floor. After this, the case was filed by 48-year-old Anvay’s wife Akshata Naik. In the suicide note received after the incident, the deceased alleged that he and his mother were forced to end their lives, as they were owed Rs 5.40 crore by Arnab Goswami and two others, Feroz Sheikh and Nitesh Sarda. The amount was not paid.

In May 2020, Ananya Naik’s daughter Adanya pleaded with Maharashtra Home Minister Anil Deshmukh for a double check. Adanya alleged that the Alibag police did not properly investigate the case. After this, the Home Minister of Maharashtra announced a fresh investigation. Earlier, the local police closed the case, saying that there was not enough evidence against the people registered in the case.