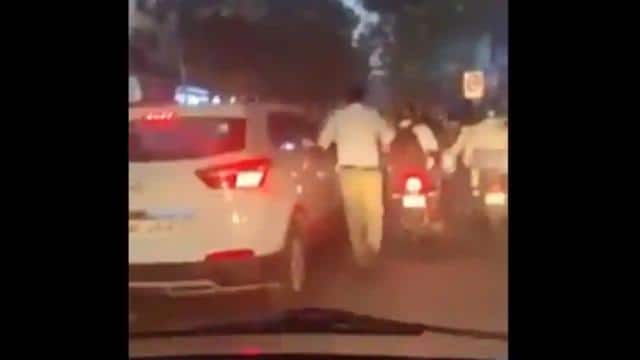 Normally you would have seen the traffic police challaning the traffic management at the busiest squares and violating the rules, but a police constable here took a kilometer to provide a fast moving ambulance without any obstruction. Runs over. Policemen’s efforts to save lives amidst heavy traffic are being praised all round. A video of this has gone viral on social media.

Constable G. Babaji of Abid Traffic Police Station saw the ambulance trapped on Monday amid traffic jam. After this, to provide a way to the ambulance, immediately came into action and ensured that the ambulance reached the hospital on time. Babaji said, ‘The ambulance was unable to move due to traffic jam. So I tried to make sure that it goes ahead. ‘

He told, ‘Without any delay I started running in front of the ambulance to clear the way. After crossing that area of ​​ambulance, I was happy and satisfied.

HTP officer Babji of Abids Traffic PS clearing the way for ambulance..Well done..HTP in the service of citizens..👍👍@HYDTPIn the same way, there are many more. pic.twitter.com/vFynLl7VVK

Many people, including Telangana Finance Minister T Harish Rao and senior police officers, shared and appreciated the video clip of Babaji. City police also shared the video on social media, which was filmed by someone sitting inside an ambulance. Babaji was praised by Hyderabad Police Commissioner Anjani Kumar and honored with a memento on Thursday. He said, “…. it was my duty …. I have done this in the past and will continue to do so even further.”

The Congress counterattacked by the Home Minister’s comment, said – we are not part of Gupkar, the statement is misleading and sheer lies

Corona, which caused worldwide destruction, completed one year, the first case was found in Wuhan city of China today