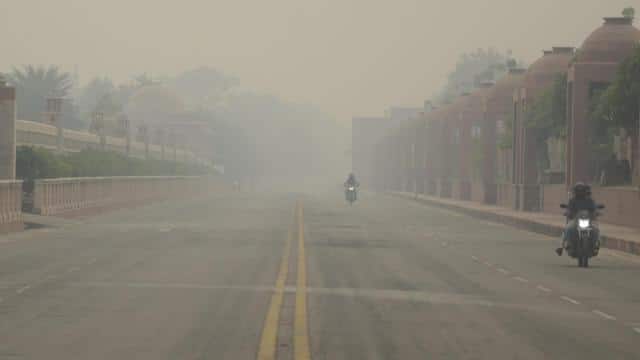 Pollution levels in Delhi continue to be dangerous. At 12 o’clock on Saturday, the capital’s air index had risen to 440. People of Delhi are troubled by this ever increasing pollution. Pollutants are constantly poisoning Delhi’s air. Hawa has reached the Health Emergency in the country’s capital. People of Delhi have complained of shortness of breath due to eye irritation and pollution.
These pictures are from Delhi Cantonment area of ​​Delhi where smog sheet has been spread due to pollution and people of Delhi are forced to live in the midst of pollution.

Delhi: Pollutants continue to affect the qualilty of air in the national capital; visuals from Delhi Cantonment area.

Locals say that they feel irritation in eyes and difficulty in breathing due to the pollution. pic.twitter.com/zXxGuEmMM5

Pollution is also proving to be a reason for the increasing cases of corona in the capital. The Indian Medical Association (IMA) estimates that 13 percent of corona cases in Delhi have increased due to pollution.

Also read- Farmers being victimized by accusing them of burning stubble

According to IMA national president Dr Rajan Sharma, more than six thousand corona cases have been coming up in the capital for the last few days. Out of which 13 percent cases have been reported due to increasing pollution. Patients with respiratory disease suffer a lot. Such patients have problems even if the air quality index is between 50 and 100. But going above 300 it is also affecting the healthy person.