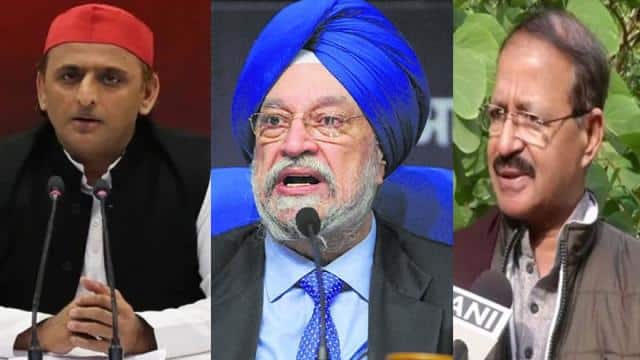 In the beginning of the new year, the government has given two vaccines to the country that is suffering from the corona epidemic. Politics has also started as soon as Oxford’s Kovishield and Bharat Biotech’s co-vaccine have been approved for emergency use. Samajwadi Party President Akhilesh Yadav first made a statement on the corona vaccine, then many opposition leaders made statements. Many opposition parties are targeting the BJP and the government through the vaccine. BJP leaders and Union Minister Hardeep Singh Puri have retaliated following the statements of several leaders including Akhilesh Yadav, former Union Minister Shashi Tharoor, Rashid Alvi. Puri has alleged that these people first questioned the valor of our soldiers and are now unhappy about the vaccine.

Union Minister Hardeep Singh Puri said, “Our in-house Cinik Jayaram, Tharoor and Akhilesh are behaving in their full real form. He first questioned the bravery of our soldiers and is saddened that the two vaccines made by India have got the green signal from DCGI. Apparently they are politically marginalized. “Let us tell you that Samajwadi Party President Akhilesh Yadav on Saturday called the Corona vaccine a BJP vaccine and said that he will not get the Corona vaccine of the Bharatiya Janata Party and everyone will come back when his government comes Free vaccination. However, he was also targeted by BJP leaders after this.

Congress leader Shashi Tharoor said – Covaxin can be dangerous
India Biotech’s indigenous vaccine Kovacine was declared dangerous by Thiruvananthapuram MP and former Union Minister Shashi Tharoor after receiving the DCGI’s approval on Sunday. He said on Twitter, “The covaxine has not yet been tested in Phase III. It has been approved ahead of time, which can be dangerous.” He urged the Union Health Minister, Dr. Harsh Vardhan, to avoid the use of covicin until the trial is over. He further said in the tweet that the Union Health Minister, Dr. Harsh Vardhan should be clarified. Until complete testing is done, its use should be avoided. India, meanwhile, may begin vaccination with the AstraZeneca vaccine.

They first questioned the valor of our soldiers & are now unhappy that the two vaccines to get DCGI nod are made in India.

Clearly they are on a quest for permanent political marginalization.

‘BJP government should not consider any decorative-showy event’
After calling the Corona vaccine a BJP vaccine, Akhilesh Yadav tweeted again about the vaccine on Sunday morning. He surrounded the government and said that the vaccination of corona is a sensitive process, therefore, the BJP government should not consider it as a decorative event and start it only after concrete arrangements. This is a matter related to the life of the people, hence the risk of improvement cannot be raised later. The fixed date for vaccination of the poor should be declared. At the same time, while reversing Akhilesh’s statement on Saturday, the Deputy Chief Minister of the state and former BJP President Keshav Prasad Maurya had said that Akhilesh Yadav does not trust the vaccine and it is an insult to the doctors and scientists of the country.

A member will get a job from the family of farmers who died in the movement, a big announcement by Punjab CM Amarinder Singh

Donald Trump, who last departed from the White House as president, will not attend Biden’s swearing-in ceremony