A special moment of marriage in everyone’s life is heavy on all his memories. What people do not try to make this moment special. Something similar was planned by a groom in Amaria in Pilibhit district in Uttar Pradesh. A bride arrived in her home on Friday in a helicopter, leaving the maternal uncle in the Amaria region. Villagers gathered at the village and helipad.

To bring their bride, the groom left in Raja Barat on Thursday along with a relative relative. Not only the family, but also the surrounding villagers eagerly awaited the arrival of the bride. At the same time, the helipad was ready. So that there is no shortage in landing. It was for the first time in the Amaria region that a bride arrived in her home in a helicopter. 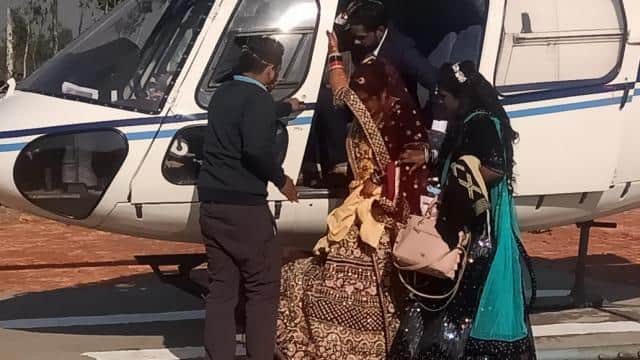 The village did not stop, apart from this the people around it kept getting curious. Please tell that Rajesh Sharma, son of Chaka resident Lalta Prasad, is married to Soni Sharma, daughter of Prakash Sharma, resident of Bhilwara Pipariya in Bareilly district. Following the norms as per Kovid rules, Rajesh, accompanied by his wife Soni, arrived by helicopter with his parents on November 27 at half past eight in the morning.

Wanted to make it memorable since the wedding was fixed. So decided to do something special. In a five-seater helicopter, I returned with my wife and parents on farewell. – Rajesh Sharma, groom

Mercury fell in most parts of North India, November coldest in Delhi after 2003