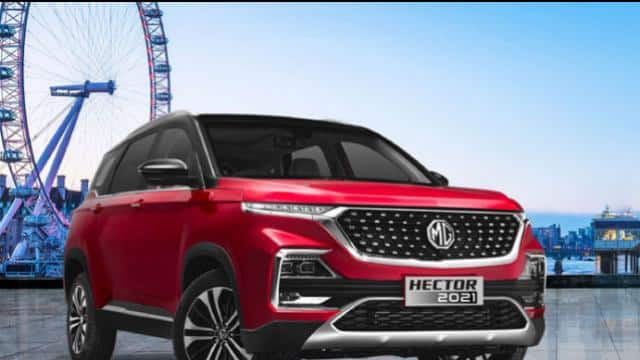 British car maker company MG has launched the facelift version of its popular SUV MG Hector. The car has many first-in-segment features and dual-tone exteriors. Also, there have been many changes in its interior. Let us know that MG Hector has a direct competition with SUVs like Hyundai Creta and Tata Harrier. So let’s know now what the new MG Hector looks like and what new features have been given in it.

How is the exterior

Talking about the exterior of the car, the new Hector has chrome tips on the front grille. A similar pattern was also seen in the ZS electric SUV. The design of the car’s headlight and fog lamps remain the same as before. Apart from this, gunmetal gray skid plate has been given at the front and back. Talking of the side profile, the car now has 18-inch alloy wheels instead of 17 inches. Dual-tone exteriors have also been given option in the top variants of the car, in which ORVMs also get black colors. There is no major change at the back. Tail lamps are available in the same way as before. However, the dark element is seen at the tailgate.

Now talk to the car in Hinglish
Talking about the interior, it now comes in dual-tone champagne-gold color option with the current all-black color scheme. It also features new wireless phone charging and front ventilated seats. The Hector facelift also features ambient lighting. The interior layout and other features are the same. The car’s rear seats can easily seat three people. The rear rear AC vents, 3 adjustable headrests and cup holders have been given. As before, the car has a 10.4-inch touchscreen infotainment system. However the company has updated the MG i-Smart system. Now it responds to Higlish (Hindi + English), which will be called a major change. ‘Hello MG, drive AC’, ‘Hello MG, open sunroof’ This is how the car works well on a total of 35 Hinglish commands. The car has 60+ connected car features. In terms of safety, the MG Hector facelift offers 6 airbags, ABS with EBD, ESC, hill-hold assist and 25 other safety features as standard. Apart from this, the car also has features like panoramic sunroof and 360 degree camera.

‘Speak up corona, get absent’, claims Sushil Modi – Lalu calls BJP MLA from jail, listen to what happened in the audience

Year Ender 2020: This year lockdown made people sit, so people showed these 7 creativity

Biden who spoke after the oath, the victory of democracy, read here the President’s first full speech

President Donald Trump broke silence on impeachment, said – this is the biggest witchhunt in history