Bihar Election Commission has deployed new DMs and SPs in Munger. Rachna Patil has been made the new DM and Manavjit Singh Dhillon has been made SP. On Thursday, the commission removed DM Rajesh Meena and SP Lipi Singh on Thursday after a fierce demonstration against the firing during the immersion of the Durga statue.

According to the information received, on the instructions of the Commission, the new DM and SP have left for Munger. He has left for Munger from Patna Airport. Both will take over at Munger with immediate effect.

Press release: –
In the light of prevailing situation in Munger, ECI has ordered immediate removal of SP and DM Munger.
ECI has also ordered inquiry into the entire incident by Mr. Asangba Chuba Ao, Divisional Commissioner, Magadh which has to be completed within next seven days. pic.twitter.com/ExnPEzwpK5

Please tell that there was a fierce demonstration in Munger on Thursday. The angry mob targeted the police stations, triggering ballade and arson. Many government cars were set on fire. After this, the Bihar Election Commission, taking major action against Munger DM Rajesh Meena and SP Lipi Singh, directed to remove both of them with immediate effect. Commissioner of magadh division Come kiss Handing over the investigation of the case, he has been asked to submit a report in seven days.

DIG Manu Maharaj said that action will also be taken against the guilty police personnel on the instructions of the Election Commission. The high-level officials of Bhagalpur and Gaya will investigate the bullet case. After this action, the DIG took over command of Munger. Police carried out a flag march across the city. The DIGs themselves were seen running along the road with security forces and police officers to set up a peace system. 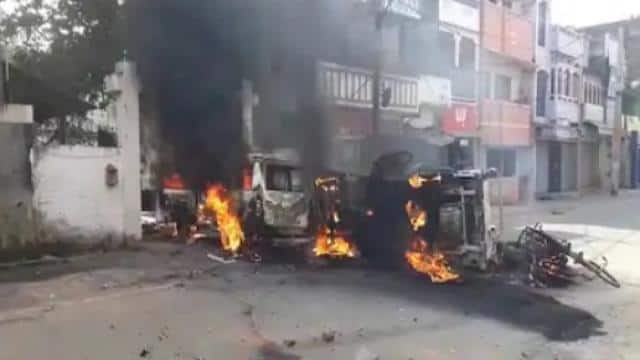 Two days ago, the statue of Maa Durga was immersed in Munger during immersion. In this, a young man was killed by firing while several people were injured. All opposition parties of Bihar including RJD, Congress and LJP were questioning the role of police-administration and government in Munger incident. Violence resumed in the city on Thursday. Markets across the city were closed since Thursday on the call of members of the Chamber of Commerce to protest the firing. Many government vehicles were set ablaze in the raging demonstrations during this period. The mob targeted the police stations, triggering ballistics and arson. After a fierce mob demonstration, the Bihar Election Commission took strong action and ordered the immediate removal of Munger DM Rajesh Meena and SP Lipi Singh.

Will Tejashwi’s nomination be canceled? JDU complains to EC, alleges this

Akash Chopra, furious over this player’s poor performance in IPL 2020, said – he does not mind being dismissed