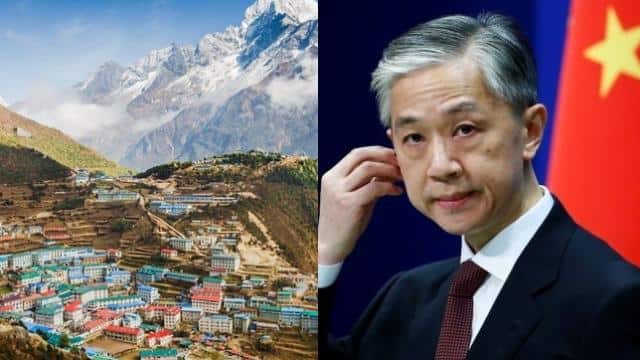 China, which created a tense atmosphere with India due to the border dispute in eastern Ladakh, has left no stone unturned to spoil its relations with another neighboring country, Nepal. Recently, media reports revealed sensational information that China has occupied 150 hectares of land along the Nepal border. However, after being thrashed all around, China has rejected these media reports outright while presenting a clarification on the matter. China has described these reports as ‘completely baseless’ and ‘pure rumor’.

Chinese Foreign Ministry spokesman Wang Wenbin has reacted to the report in the British newspaper The Telegraph. This report claimed that Nepal’s leaders said that Beijing has occupied 150 hectares of land on the Nepal-Tibet border towards Nepal. When asked about this report, spokesperson Wang said, “I want to state that the report is completely rumored.”

He added, “The report is not based on fact. This is pure rumor. ”Last month, in October, Chinese government media also dismissed reports that China had annexed land in Nepal’s Humla district. China’s Propaganda newspaper Global Times said in an October 16 report, “Some buildings in Nepal have accused China of encroaching on their land in Humla district, which is actually one in Burang County in the Tibet Autonomous Region of China.” It is a newly built village.

Also read: After India, China’s wrangling from this country, preparing to take revenge

India was blamed by Global Times in its report. Regarding India, which had no meaning in any way in the whole case, the Chinese newspaper had accused New Delhi that India promoted the case. Also accused the opposition of Nepal at the behest of New Delhi. The report said, “The main opposition of Nepal which is promoting the whole affair, its inclination is considered towards India”.

What more propaganda did China spread?

China had propagated propaganda referring to the border dispute between India and Nepal. The Global Times said in the report that India has in fact been in a long-running territorial dispute with Nepal. The Indian government included a disputed territory with Nepal in its new map in 2019, triggering a confrontation between the two countries. In response, Nepal passed a new map in Parliament, which included Kalapani and other areas.

What was the report of British newspaper?

The British newspaper The Telegraph published a report on China and Nepal. This report claimed that China occupied 150 hectares of land in Humla district of Nepal. China sent its PLA troops to the border and started occupying it on five fronts from May. The report further said, “In Humla district, PLA troops crossed the border and removed the pillars present in Limi valley and Hilsa. After this, the PLA started building military bases. ”