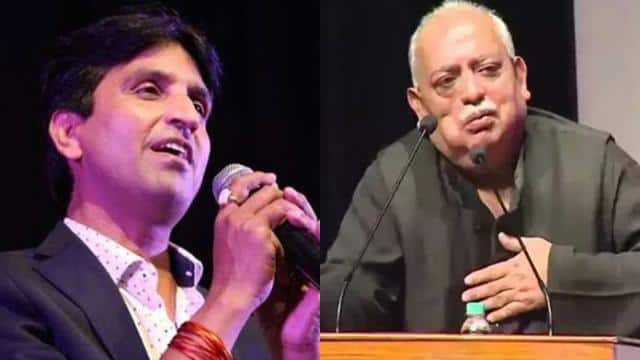 Popular poet Kumar Vishwas has reacted to the controversial statement of famous poet Munawar Rana given about the terrorist attacks in France. He has targeted Munavvar Rana’s statement through the lines. Among the lines that Vishwas has tweeted, the last line is, “These colors come off in the first rain.”

Reacting to a news about the controversial statement of famous poet Munawar Rana, Vishwas has written a few lines of Javed Akhtar. He said, “Soft Alphas, well-meaning morals, these colors come out in the first rains.” These lines clearly show that Kumar Vishwas disagrees with the statement made by Munawar Rana on the France terror attack. This tweet is being well liked on Twitter. So far, more than 15 thousand users have liked it, while more than one thousand seven hundred times have been retweeted.

Also read: Disputed statement of famous poet Munawar Rana on the terrorist attack in France, said – If you make an offensive cartoon, you will kill it

What did Munawar Rana say?

Munawar Rana had said in his disputed statement that if someone makes a dirty cartoon of his parents or God, then they too will kill him. Talking to a private channel, the famous poet Munawar Rana said on Saturday, “If someone makes a dirty, objectionable cartoon of our parents or God, we will kill him.” Honor killing is justified and there is no punishment, then how can you call it illegitimate. This is happening all over the world. The famous poet had said that whoever made the cartoon of Prophet Mohammed did wrong by doing so.

After cleaning all round cleaning

At the same time, Munawar Rana presented an explanation after being surrounded all round about his statement. He said that whatever is happening in France at the moment is all wrong. It was also wrong to make cartoons that manipulated the Islamic religion, and the incident that killed the cartoonist or teacher is also wrong. According to the law of France, they get whatever punishment they want. In such a situation, the people of France should also think that if something wrong has happened then people of other communities should not do wrong in return. Religious feelings should be valued in the country. There can never be peace in a country which does not do this.

If the firecrackers are not burnt, the level of PM2.5 will be the lowest in 4 years on Diwali: Travel