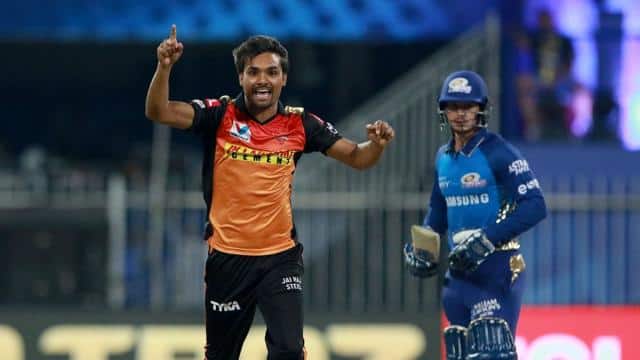 The Sunrisers Hyderabad team won a stunning 10-wicket win against Mumbai Indians by their bowlers. The Hyderabad bowlers performed well in this match and allowed Mumbai’s strong batting order to score just 149 runs in 20 overs. The most successful bowler for the team was Sandeep Sharma, who took three wickets for 34 runs in his four overs. Sandeep overtook Zaheer Khan in a special case with the wicket of Quinton Dickock in this match.

How SRH’s luck turned, this one change gave new life to the team

In the opening three balls of the fifth over of the Mumbai Indians innings, Dickock hit Sandeep Sharma for 16 runs, including a four and two sixes, but after that, Sandeep returned the fourth ball and bowled Dickock. With Dickock taking the wicket, Sandeep Sharma became the highest wicket-taker in the Powerplay in the history of IPL. Sandeep now has 53 wickets in the powerplay, breaking the record of former fast bowler Zaheer Khan (52 wickets).

IPL 2020: playoff battle between these four teams, know who will fight whom

Sandeep Sharma has done consistently well with the new ball for Sunrisers Hyderabad since Bhuvneshwar Kumar’s injury. Sandeep has played a total of 13 wickets in 11 matches played so far this season, while his economy is also 7.34. After the win against Mumbai, the Hyderabad team have reached the final four and will face Royal Challengers Bangalore in the first eliminator.