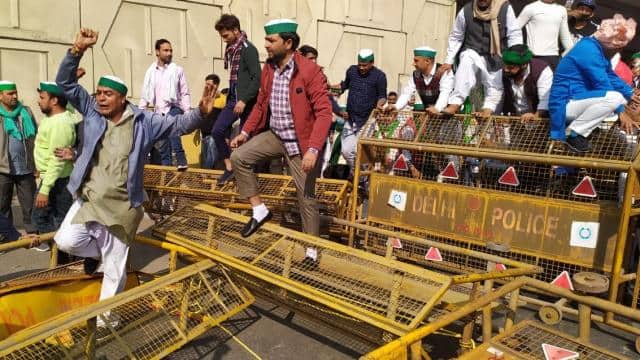 Farmers agitating against the new agricultural law are sitting on the borders of the capital for Delhi’s journey. On the one hand, while farmers of Haryana and Punjab are trapped on the Singhu and Tikri borders of Delhi, on the other hand, on the UP border, farmers have been camping in thousands under the leadership of Bharatiya Kisan Union (BKU) leader Rakesh Tikait. Despite Amit Shah’s appeal and PM Modi’s Mann Ki Baat program, farmers are not ready to back down, despite showing the benefits of new agricultural laws to farmers. On the Singhu border, the farmers are discussing the strategy ahead, while at the UP gate, the farmers became furious. Here the farmers demonstrated by breaking the barricades of the police. On the other hand, the proposal of the meeting with the condition was rejected by the farmers. The route has been diverted by the Delhi Traffic Police due to the demonstrations of farmers sitting on the dharna on the Singhu border.

– Uproar of farmers on Delhi UP border (Ghazipur-Ghaziabad). Angry peasants tried to break the police barricades.

Visuals of farmers trying to break through the barricades at Ghazipur, Delhi pic.twitter.com/dMunJhmDdg

– Surjeet S. Phool, President of BKU Revolutionary (Punjab) said- We have decided that no political party will be given the opportunity to speak from our platform, whether Congress, BJP, AAP or any other party. Our committee will allow other organizations, which are in our support and will speak according to our rules.

In Delhi, farmers sitting on dharna protesting against the new agriculture law have got the support of Khap Panchayat. On Sunday, the Khap Panchayat has decided that they are with the farmers of the country with wholehearted wealth. Rohtak MLA Sombir Sangwan told that all the Khap will travel to Delhi tomorrow to support the farmers.

–Looking at the farmers’ agitation, the Union Agriculture Minister said that the Government of India has held three rounds of talks with the farmers, proposing to meet for the fourth time on December 3. The government is ready to negotiate with open mind at every level, but the farmers union should create an atmosphere of dialogue. They should leave the path of movement and adopt the path of discussion

– The farmer leaders sitting on the dharna on the Delhi Singhu border have said that the condition which was there for talks by the government, we consider it an insult to the farmers organizations. Now we will not go to Burari Park at all. We have come to know that that park is not open zel. Instead of going to the Open Zell, we will block the 5 Main Road and siege Delhi.

Due to the agitation of farmers in Delhi for four days, Delhi Traffic Police has issued an alert. Farmers continue to protest against the new agriculture law. The farmers sitting on the dharna on the Singhu border have completely blocked the highway. In view of this, the Delhi Traffic Police has diverted the route. Police said traffic has been diverted from Mukarba Chowk and GTK Road. People are requested to escape from Signature Bridge to Rohini and from Bari Rinh Road to GTK Road, National Highway and Singhu Border.

These borders would not have been sealed if the Haryana government had not tried to stop the farmers from the water canon. The government should have already earmarked space for farmers. Haryana government has done the work of hurting the farmer’s farm by carving roads: former Haryana Chief Minister Bhupinder Singh Hooda pic.twitter.com/0nyVcOdHvZ

Anna Hazare supported the agitation of farmers from Maharashtra.

-The farmers agitating against the agricultural law rejected the proposal of the Central Government. Farmer leader Harmeet Singh Qadian said that we have decided that all the borders and roads will remain such blocks. The Home Minister had placed a condition that if we sit on the ground, he would immediately call for a meeting. We have rejected the condition. We will go only if they call us for an unconditional meeting.

– Rakesh Tikait said that we are in no hurry to go to Delhi. Talks with the government on the 3rd. Only then it will be decided what to do next.

– On Sunday afternoon, the crowd of farmers started growing on the UP border. During this time, the farmers are protesting vigorously by dropping the barricading of Delhi Police.

Home Minister of Delhi Satyendar Jain said that there should be no condition for negotiation with farmers. The central government should be organized immediately, they are the farmers of our country. They should be allowed to hold their protest where they want.

There should not be any condition for talks with farmers. The talks should be held immediately. They are the farmers of our country. They should be allowed to stage their protest where they want: Delhi Home Minister Satyendar Jain https://t.co/HEjmQRkjuG pic.twitter.com/CVHRXGiupl

– There is a meeting of farmers protesting against the agricultural laws on the Singhu border.

#UPDATE: A meeting of farmers underway at Singhu border (Delhi-Haryana) as they continue their protest against the farm laws. https://t.co/C4Ps6AR56Y

– BJP MP Shahnawaz Hussain said that we worry about farmers and will continue to do so. Farmers live in our hearts, do not do any work to provoke farmers. The decision we take is in the interest of the farmers. Misunderstanding is being created among the people. Our appeal is that they should not fall prey to misunderstanding.

– Shiv Sena MP Sanjay Raut said that the way farmers have been prevented from entering Delhi, it seems as if they do not belong to this country. They have been treated like terrorists. Since they are Sikhs and come from Punjab and Haryana, they are being called Khalistani. This is an insult to the farmers.

The way farmers have been stopped from entering Delhi, it looks like as if they don’t belong to this country. They have been treated like terrorists. Since they are Sikh & have come from Punjab & Haryana, they’re being called Khalistani. It is insult to farmers: Sanjay Raut, Shiv Sena pic.twitter.com/XaE529oZUL

Joint CP Surender Yadav of Delhi Northern Range said that agitating farmers are sitting in peace and are still cooperating. Our aim is to maintain law and order and ensure that the system is in place to facilitate their movement.

They (agitating farmers) are sitting peacefully & have been cooperating till now. Our objective is to maintain law & order & to ensure that the arrangements are in place to facilitate their movement: Surendra Yadav, Joint CP, Northern Range, Delhi pic.twitter.com/Aep9uc827E

– BSP supremo Mayawati said that farmers are quite angry and agitated all over the country, expressing their disagreement about the recently implemented three laws related to agriculture by the central government. In view of this, if the Central Government reconsiders these laws, made without the consent of the farmers, it is better.

Farmer protesters are protesting on the Ghazipur border to protest against the agricultural laws. A protesting farmer said that we will travel to Delhi today and go to Jantar Mantar or Parliament House.

– Protest of farmers on Singhu border (Delhi-Haryana border) continues, security personnel deployed. The farmers here decided yesterday that they would continue their protest here and not go anywhere else. It was also decided that they would meet daily at 11 am to discuss the strategy.

Farmers at the border decided yesterday that they will continue their protest here & won’t go anywhere else. It was also decided that they’ll meet at 11 am daily to discuss strategy. pic.twitter.com/N7oVTXKVee

– Farmers sitting on dharna at UP gate. During this time they were eating food sitting on the road.

– 24 hours after the Nirankari Satsang Maidan in Burari was given to the farmers, the farmers are still standing on the Indus border.

Political parties gathered in Burari
Political agitation has increased in Nirankari Satsang Maidan in Burari in support of farmers. The main opposition party in Punjab and the Aam Aadmi Party, which is in power in Delhi, have come out openly in support of farmers. All arrangements are being made by the Delhi Government at Burari Maidan. MLA from Burari, Sanjeev Jha has himself taken charge. At the same time, Congress leaders are also making their attendance. On Saturday, Alka Lamba also reached Burari Satsang Maidan.

What are the farmers afraid of the new law
– Farmers organizations in Punjab and Haryana say that the minimum support price (MSP) system will be destroyed by the recently implemented laws by the Center.
– He argues that in the long run, big corporate houses will do their own free will and farmers will get a lower price for their produce.
– Mandi system will end due to new laws. Farmers will not get proper price for their crops and the agents will also get out of this business.

What is the demand
The important demand is to withdraw these three laws, which they claim that these laws do away with the regulation of the sale of their crops. The farmers are also demanding withdrawal of the proposed Electricity (Amendment) Bill 2020. They fear that after this law they will not get subsidy on electricity.

IND vs AUS: After Prithvi Shaw’s poor performance, Wasim Jaffer supported him in his style

Delhi: Farmers Mall set up at Tikari Border for agitating farmers, getting everything needed

The question raised by the opposition on the counting process in Bihar, the Commission gave these answers