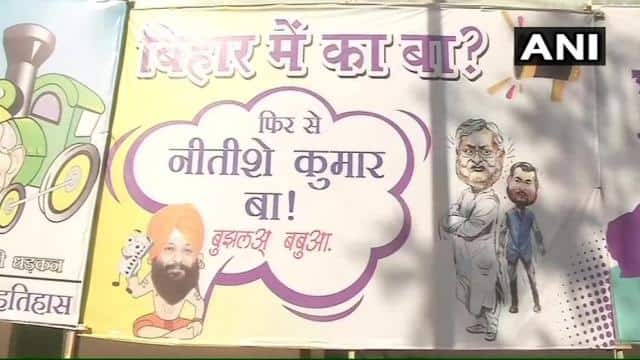 In a very exciting contest in the Bihar Assembly elections, the Nitish Kumar-led National Democratic Alliance (NDA) achieved a magical figure of majority by winning 125 out of 243 seats. At the same time, the Mahagathbandhan got 110 seats in the account.

Bihar: Posters put up outside JD (U) office in Patna after CM Nitish Kumar-led NDA in the state registered a victory in #BiharElections

At the same time, the process of posting posters is going on outside the BJP office in Patna. It has a picture of Prime Minister Narendra Modi and thanks to the people of Bihar.

Bihar: Posters put up outside BJP office in Patna after NDA registered a victory in #BiharElections

Explain that there is a festive atmosphere in the BJP after the historic victory in Bihar elections. Now the NDA has got a majority and the BJP has become the largest party in the NDA. Celebrations are in preparation at BJP headquarters in Delhi. Today, BJP President JP Nadda will reach the headquarters at 5 pm, along with PM Modi will reach the BJP office at 6 pm.

Big upset in Bihar election
However, there were many big ups and downs in the Bihar elections. While the government ministers Krishnanandan Prasad Verma, Suresh Sharma, Shailesh Kumar, Feroz Ahmed, Brajkishore Bind and Jayakumar Singh suffered defeat, Abdulbari Siddiqui of the RJD, Rajendra Singh went to the LJP from BJP and VIP party leader Mukesh Many heavyweights including Sahni also lost the election.

Digvijay Singh clarified on the audio viral of the SP candidate being removed from the election, said- I will contest him Municipal Corporation