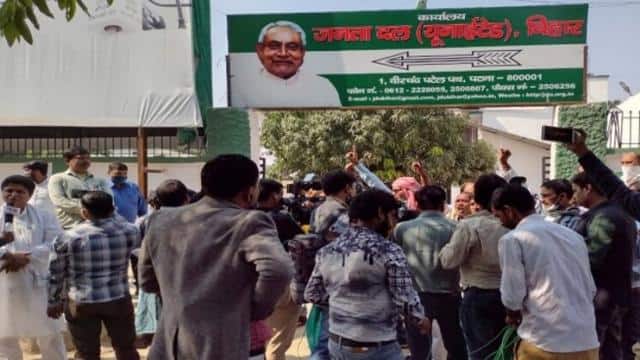 Let us know that there has been a situation of confusion in the counting of Bihar assembly elections since morning. The situation has not been cleared yet. The NDA is leading in 121 seats and the Grand Alliance is leading in 114 seats. The RJD is emerging as the largest party in the state. Meanwhile, in the afternoon the BJP and JDU’s leadership increased with the Grand Alliance, and the offices of both parties started celebrating. Fireworks started. Sweets started being distributed. During this time, this poster also appeared on the JDU office in which Tejashwi was taunted without taking his name.

According to the Election Commission, till 6:30 pm, more than 3 crore votes have been counted. The counting will go on till late night. By 6:30 pm, NDA is leading on 123 seats and Mahagathbandhan 112 is ahead. According to the trends, the NDA government in Bihar seems to be forming. The Bharatiya Janata Party is emerging as the largest party in terms of seats in Bihar and is leading in more than 73 seats. While the RJD has emerged as the second party, the RJD is still leading in 70 seats. In the grand alliance, Congress is ahead in 20 seats, while JDU is leading in 50 seats in NDA.

Results will come till late night: Election Commission
According to the Election Commission, this time the results of the Bihar assembly elections will come till late night. In the Corona crisis, votes are being counted with many precautions, as well as the number of counting booths has also increased by nearly 50 percent. There are many seats where votes are to be counted from 19 to 51 rounds this time. Around 1.34 crore votes were counted till 2.30 pm, while by 6 pm, more than three crore had been counted.

Furious China stares at US, says tension with India on LAC bilateral issue