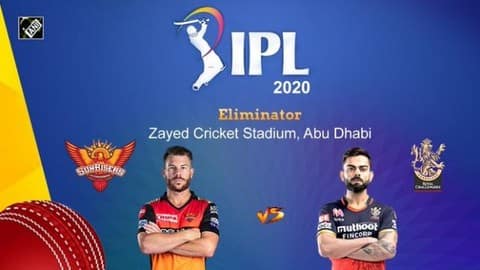 Being played in the UAE Indian Premier League 2016 winner in the 13th season (IPL 2020) eliminator match Sunrisers Hyderabad Face off Royal Challengers Bangalore From Abu Dhabi Sheikh Zayed Stadium Is happening in In this match, Hyderabad captain David Warner has decided to bowl first by winning the toss against RCB. Bangalore’s innings continues at this time. Wriddhiman Saha is not playing for Hyderabad in this match due to injury. In his place, Srivats Goswami is handling the wicketkeeping in the team. Apart from this, RCB has made several changes, replacing Chris Maurice, Josh Philip, Shahbaz Ahmed and Isuru Udana, Aaron Finch, Adam Jampa, Navdeep Saini and Maine Ali in the playing XI.

While Warner captained Hyderabad to win the last three matches and make it to the playoffs, Virat Kohli’s army has suffered consecutive defeats in their last four matches. The team got a place in the eliminator match due to good net runrate.

Playing XI of both teams