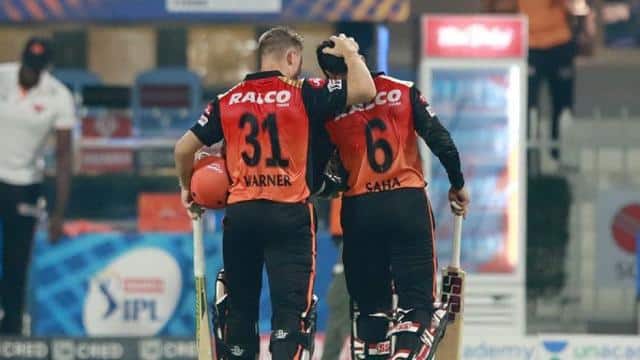 Sunrisers Hyderabad entered the Indian Premier League playoffs by defeating Mumbai Indians by ten wickets in a ‘do or die’ match on Tuesday, thanks to the impressive performances of David Warner and Wriddhiman Saha’s aggressive half-centuries and bowlers. The Sunrisers had to win the match at all costs to make it to the Final Four. With his win, Kolkata Knight Riders were eliminated from the tournament. Sunrisers came third after Mumbai Indians, Delhi Capitals in the score sheet and will now face RCB in fourth place in the Eliminator.

Sunrisers bowled first to restrict Mumbai to 149 for eight wickets. In response, Warner and Saha scored 151 runs in 17.1 overs without losing any wickets. Warner remained unbeaten on 85 off 58 balls which included 10 fours and a six, while Saha scored 58 runs in 45 balls with the help of seven fours and a six. This is Warner’s 48th half-century in the IPL and he became the league’s most successful foreign batsman. Only more runs in the IPL are Virat Kohli (5872 runs in 191 matches) and Suresh Raina (5368 runs in 193 matches). Warner has reached 5210 runs in 140 matches.

If Kieron Pollard had not finally scored 41 off 25 balls, Mumbai’s situation would have been worse. Pollard scored three consecutive sixes off T Natarajan in the 19th over to bring Mumbai to a respectable score. He hit two fours and four sixes in his innings. Captain Rohit Sharma returned to the Mumbai team, who was out of the last several matches due to injury, though he could not do any great work in batting and became Sandeep’s first victim by scoring four runs. Rohit was also not selected in the Indian team for the tour of Australia due to the same injury.

In the third over, Sandeep caught Rohit in the hands of Warner and gave a tough blow to Mumbai. Quinton Dickock hit Sandeep for two sixes and a four in the fifth over, but was bowled on the next ball. He scored 25 runs in 13 balls with the help of two fours and two sixes. The in-form Suryakumar Yadav added 36 runs in 29 balls with five fours, while Ishaan Kishan scored 33 off 30 balls which included one four and two sixes. He was bowled by Sandeep and Yadav missed out on Shahbaz Nadeem’s ball in an effort to play, but Wriddhiman Saha did not miss a stumping. Mumbai had rested Hardik Pandya, Jaspreet Bumrah and Trent Boult in this match. Krunal Pandya returned without opening the account, catching Kane Williamson off Nadeem.

Sunrisers Hyderabad innings:
David Warner 85 not out
Wriddhiman Saha 58 not out

The longest death of Assam CM Tarun Gogoi at the age of 84, PM Modi expressed grief