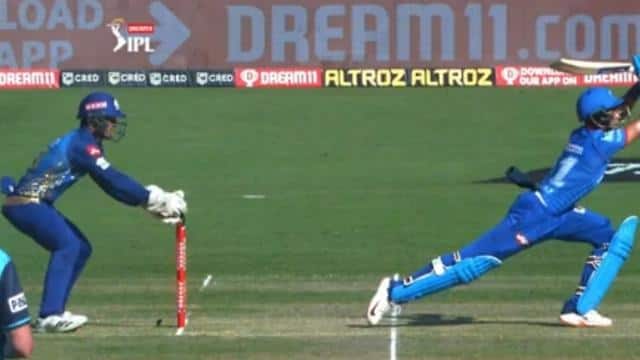 Delhi Capitals suffered a one-sided nine-wicket loss to Mumbai Indians in the first match of IPL on Saturday due to the disappointing performance of their batsmen, which has increased Delhi’s wait for the playoffs. This is Delhi’s fourth consecutive defeat while Mumbai have secured their place in the top two spots with a ninth win. Mumbai held Delhi to a modest score of 110 for nine in 20 overs and then scored 111 runs at the loss of one wicket in 14.2 overs to secure their ninth victory in this IPL. During Delhi’s innings in this match, Mumbai wicketkeeper Quinton Dickock did something that compared him to former India captain Mahendra Singh Dhoni.

In fact, the Delhi team got off to a bad start after losing the toss and the team lost both openers for 15 runs. The Delhi captain, who came out to bat at number three, wanted to decorate the team’s innings with Rishabh Pant here. There was a 35-run partnership between the two players when Mumbai spinner Deepak Chahar came to bowl. On one of his flight balls, Shreyas tried to play a long shot but he could not connect the ball to the bat. During this time the ball went to wicketkeeper Quinton Dickock. He immediately grabbed the ball and hit it at the stumps and dismissed him. This style of Dickock was very much like MS Dhoni, who is known for very fast wicketkeeping.

Due to the dismal performance of Delhi batsmen in this match, they could only score 110 runs in their 20 overs game. For the team, captain Shreyas Iyer made the maximum 25. Apart from him Rishabh Pant scored 21 while R Ashwin and Kagiso Rabada scored 12-12. For Mumbai, fast bowlers Trent Boult and Jasprit Bumrah took three wickets each. Chasing this small goal, the young Ishaan Kishan played an attractive innings of 72 runs from 47 balls for Mumbai.

Apart from him, Dickock scored 26 while Suryakumar Yadav scored 12 runs. The only wicket for Delhi was picked by fast bowler Enrich Nortje. With this win, Mumbai has 18 points from 13 matches and is guaranteed to remain in the top two teams. Ishan Kishan, who scored 72 runs in this match, received the Player of the Match award.

Taking a bath with hot water for a long time can take away your beauty, do you also make big mistakes related to health in winter?