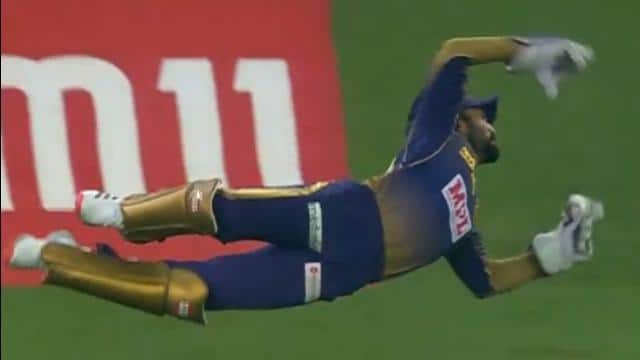 Two-time champions Kolkata Knight Riders bowed out of the tournament after defeating the Rajasthan Royals on Sunday, as well as keeping their hopes of going into the playoffs. Kolkata scored 191 runs thanks to a 68-run stormy innings by captain Eoin Morgan. In response, Rajasthan’s entire team could only score 131 runs in the scheduled overs and lost the match by 60 runs. Fast bowler Pat Cummins was also instrumental in Kolkata winning the match, taking Rajasthan’s four wickets, including the big wicket of Ben Stokes. His catch was taken by wicketkeeper Dinesh Karthik by diving into the air. This ketch is becoming quite viral on social media.

The catch was so spectacular that it was also shared with the official Twitter account of the IPL. It was written in, “Dinesh Karthik took a tremendous catch that led to Ben Stokes getting out” Could He single-handedly won his team the last two matches. It also included a brilliant century against four-time champions Mumbai Indians.

An absolute stunner of a catch from DK to get the BIG wicket of Stokes.

IPL 2020: Sanjay Manjrekar’s advice to Prithvi Shaw, learn from this player how to shoot a bridge shot

Rajasthan had a poor start in response to the target of 192 runs from Kolkata in this match. The team lost the first wicket in the first over as Robin Uthappa. By 37 runs, the team had lost the wickets of five legendary players including Ben Stokes, Captain Steve Smith and Sanju Samson. Here wicketkeeper batsman Jos Buttler teamed up with Rahul Tewatia to bring the team score to 80 runs. On this score, Kolkata spinner Varun Chakraborty dismissed Butler to Pat Cummins and pushed Rajasthan towards defeat. Tewatia tried to win the team by scoring 31 runs in this match but this effort proved to be insufficient.