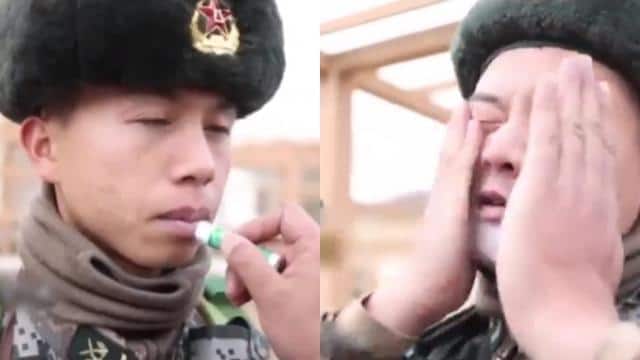 The People’s Liberation Army (PLA) of China has been in the news for a long time. Sometimes the Chinese Army is in the news about the dispute going on in Ladakh with India, sometimes some such video of it goes viral, on which people all over the world laugh. Recently, a similar video of the Chinese Army has come out, after which people started having fun. Actually, in the video that has surfaced, Chinese army personnel are applying sunscreen on their faces. Apart from this, lip balm is also applied on the lips.

The Chinese government’s propaganda media house Global Times has released a video of Chinese soldiers applying sunscreen. It can be seen in the Global Times video that some Chinese soldiers first apply sunscreen on their hands and then apply it on their faces. Jawan looks quite happy in the video. At the same time, some youngsters are also seen applying lip balm on their lips.

What did the Global Times write on the video?

Global Times has praised the soldiers by sharing the video. The Global Times wrote, “Attention! PLA jawans are giving ‘skincare’ lecture. Before going on patrol, Jawana is applying sunscreen and lip balm and changing her serious look to ‘cute’. This video has been shared by Global Times on her Twitter account. Soon after, many users started having fun. An Indian user wrote that and these days they are making plans about confronting the Indian Army soldiers. Jawans of Cute PLA vars of Indian Army. I have less words for them.

Attention! PLA frontier guards are giving a “skincare” lecture! Before heading on patrol, soldiers apply sunscreen and lip balm, turning their usual serious looks into “cute” ones. With lots of user experiences, soldiers can provide some good recommendations. pic.twitter.com/DFwOcmtfbX

Videos have also gone viral before

This is not the first time that a video of a Chinese army soldier has gone viral. Earlier also a video went viral, in which Chinese army personnel were seen crying. The soldiers of the neighboring country were so afraid that as soon as the Chinese soldiers came to know that their deployment was going to be done on the Indo-China border in Ladakh, they had tears in their eyes. Pakistani comedian Zaid Hamid posted a video on Facebook on 22 September. In this video, some Chinese soldiers are seen sitting in a bus. They are all crying, because their posting is going to be on the border of Ladakh.