Independent MP from Amravati, Maharashtra Navneet Rana has come out of jail for the 13th day today. He was released after the Borivali court in Mumbai ordered his release. After being released, he has been admitted to Lilavati Hospital for medical treatment. BJP leader Kirit Soumaiya came to meet him at the hospital. At the same time, after getting bail, a copy of Hanuman Chalisa was seen with MLA Ravi Rana while going to Lilavati Hospital for medical. He took this copy with him.

Earlier, Rana’s lawyer had put a copy of the release order in a bail box kept outside Byculla Jail in Mumbai. Let us inform that Navneet Rana and her MLA husband Ravi Rana got bail on Wednesday itself, but they could not be released from jail due to non-completion of the court process. The sessions court had granted him conditional bail. The Rana couple was given bail on a personal bond of 50 -50 thousand. 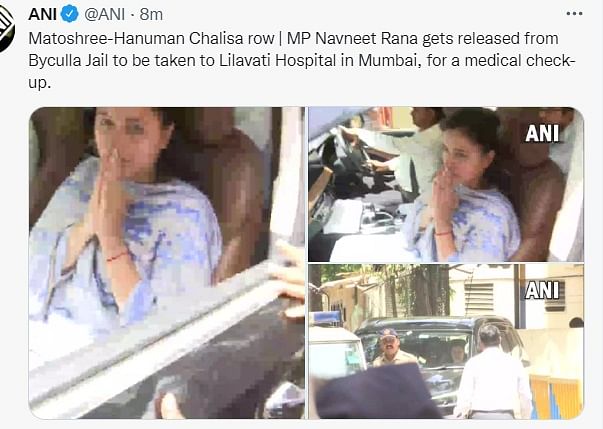 Bail was granted on these conditions

Police will have to give notice 24 hours in advance

The arrest was made on 23 April

Let us inform that Navneet Rana, MP from Amravati in Maharashtra and her MLA husband Ravi Rana were arrested by the Mumbai Police on 23 April. The two were arrested over a dispute over reading Hanuman Chalisa outside Matoshree, the residence of Maharashtra Chief Minister Uddhav Thackeray. Earlier, his bail plea was rejected by the High Court.