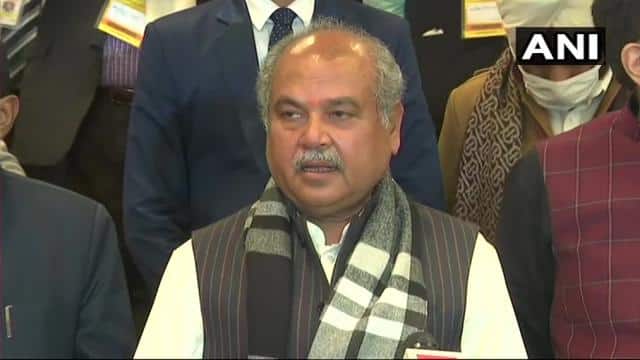 The eighth round of talks between the central government and farmers’ organizations, which took place on Friday amid the deadlock over the new agricultural laws, is also benTeejIs going Now the ninth round will meet on 15 January. During the meeting, the Agriculture Minister said that if the farmers organization gives any alternative proposal other than withdrawal of the bill, it will be considered seriously.

After the meeting, Union Agriculture Minister Narendra Singh Tomar said that there was an intense discussion on the three agricultural laws with farmer unions today, but still no solution was found. It was said on behalf of the government that any option other than withdrawal of laws should be given, but no option was found. Tomar said that the government has repeatedly said that if the farmers’ organizations give any option other than to withdraw the law, then we are ready to talk. He said that those opposing believe that these laws should be withdrawn, but many people in the country are in favor of these laws. Hopefully we will have a new proposal in the next meeting and a solution will be found for this matter. We will try to resolve it as soon as possible.

Discussion on the laws was taken up but no decision could be made. Govt urged that if farmer unions give an option other than repealing, we’ll consider it. But no option could be presented, so the meeting was looked & it was decided to hold next meeting on 15th Jan: Agri Min pic.twitter.com/HTrWu6G2HL

At the same time, after talks with the government, the National Spokesperson of the Bharatiya Kisan Union, Rakesh Tikait said that the farmers will not trust before the law is repealed. We will come again on the 15th. we’re going nowhere. The government wanted to talk about the amendments. We do not want to discuss clause wise. We only want to repeal the new agricultural laws.

Farmers won’t relent before the laws are repealed. We’ll come on 15th again. We’re not going anywhere. The govt wanted to talk about amendments. We don’t wish to have clause wise discussions. We simply want a repeal of the new farm laws: Rakesh Tikait, Spox, Bharatiya Kisan Union pic.twitter.com/wAB0YXq2wt

During the meeting, agitated by their demand for repeal of the three agricultural laws, the farmer leaders said on Friday that their return home will be only when the government withdraws these laws. The government rejected the demand for complete repeal of the laws and insisted on limiting the discussion to its controversial points.

It is being told that the next date of the meeting has been fixed keeping in mind the hearing on January 11 in this case in the Supreme Court. Supreme Court on this day Peasant movement One can also consider the validity of all the three laws apart from other issues related to.

Tina Dabi, who is going to divorce her husband Athar Khan, is reading ‘Hanuman Chalisa’, said- whenever I have negativity …

Farmers have created a new history, which will be told to the coming generations: Diljit Dosanjh