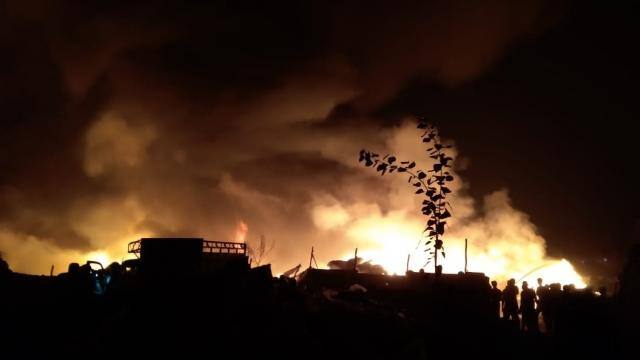 A fierce fire broke out late Tuesday night in the slums of Bhopura Kuti area of ​​Ghaziabad, adjoining the capital Delhi. On receiving information at around 9:40 pm, 12 fire engines were dispatched from the fire stations at Sahibabad, Vaishali, Loni and Modinanagar. On Tuesday late at around one o’clock, fire personnel overcame the fire.

A late-night fire in the slums took a formidable sight on sight. After which fast fire spread to the junk kept in hundreds of slums. Due to which strong smoke started echoing with the flames. During this time people have faced a lot of trouble. The people living in the slums came out of the slums after saving lives.

We have stopped further spread of fire. It will be brought under control. The cause of fire is being ascertained. No casualties have been reported. Residents of this area have shifted to their temporary houses nearby: SP (Rural) Neeraj Kumar Jadaun https://t.co/x7rEzaUpPY pic.twitter.com/2pMFCu5nLx

The belongings of the people, including the junk kept in the slums, were burnt to ashes. At the same time, the exact cause of the fire has not been known yet. Fire crews, including the police, immediately reached the spot on notice of the fire. Chief Fire Officer Sunil Kumar Singh said that the fire was burning with flames from the junk kept in the slums. At present, the fire has been brought under control. It has been reported that no casualties were reported in this accident.

When will peace be restored at LAC? There will be another round of meeting between India and China soon