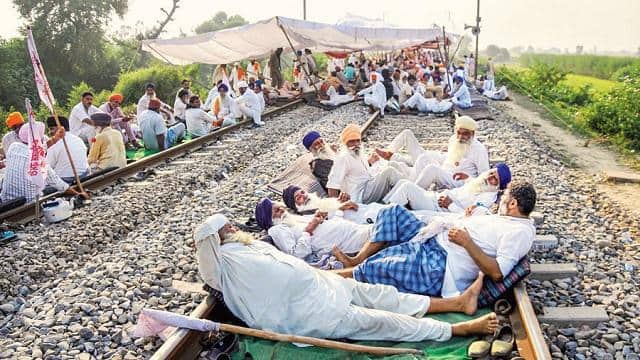 Indian Railways have suffered a huge loss of about Rs. 1200 crores due to the war between the central and Punjab governments over giving way to trains amid protests on agricultural bills. Due to the demonstration, 2,225 freight trains had to be canceled while 1350 passenger trains either had to be canceled or diverted.

Trains were stopped in Punjab for nearly a month from September 25, after the central government approved the agricultural bills during the monsoon session, on track.

According to railway data, around 70 passenger trains were affected daily and a total of 1373 passenger trains either had to be canceled or diverted. This has resulted in a loss of Rs 45 crore to the Railways.

The Railway Minister on Wednesday claimed that protests are being organized on behalf of protesters at 32 places along the railway tracks in Punjab, due to which the movement of trains will remain suspended.

read this also: More than 1 crore passengers of waiting list could not travel in 2019-20

A spokesman of the Railway Ministry said- “The protesters are continuing their demonstrations on platforms or near railway tracks. Due to the sudden movement of trains at several places, especially in Jandiala, Nabha, Talwandi Sabo and Bathinda on behalf of the protesters, operational and security In view of the movements of trains have been stopped. “

He said- “All those trains which passed through Punjab have also been affected badly. So far, about 1350 passenger trains had to be canceled, diverted or shortened. Due to this, the passengers have suffered a lot during the Corona time. ”

According to the Center, all incoming and outgoing goods transportation including essential commodities in Punjab, Jammu and Kashmir, Ladakh and Himachal Pradesh have been adversely affected. According to the Railway Ministry, several freight trains, including Male-laden trains, were stuck for 15 to 20 days due to suspension.

Ind vs Aus: Glenn McGrath told which Australian cricketer will be X-factor in the series against India