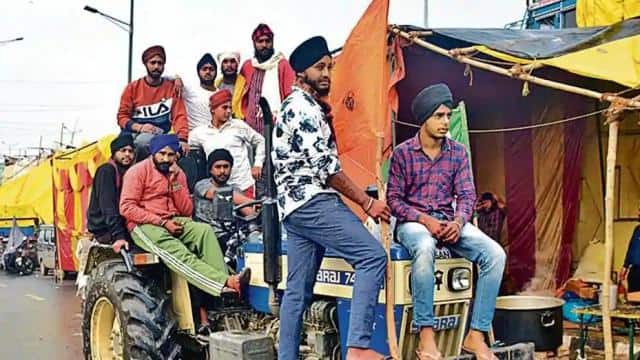 The agitation of the farmers continues in protest against the new agricultural laws of the central government. Thousands of farmers have been standing on the borders of Delhi for the past one and a quarter months and are demanding the withdrawal of the law. Seven rounds of farmers’ talks with the governmentTeejSo, farmers have intensified their agitation and today tractors will march on the borders of the capital. Farmers protesting at UP Gate in Ghaziabad today i.e. Thursday morning on 135 km long Eastern Peripheral Expressway The Republic Day For ‘dress rehearsal’ of their ‘tractor march’. This rehearsal is likely to have an impact on people passing through two national highways, including NH-9. However, Yogendra Yadav said that these farmers will not enter Delhi today. Meanwhile, National Highway Authority of India (NHAI) officials said tractors are not allowed on the Eastern Peripheral Expressway.

Under the auspices of the Samyukta Kisan Morcha, the route on Eastern Peripheral has been changed for the common passengers in view of the tractor journey taken by the farmers from Ghazipur border to Palwal on Thursday. Not only this, 31 duty magistrates and heavy police force have been deployed around the Kundli-Ghaziabad-Palwal (KGP) and Kundli-Manesar-Palwal (KMP) Expressways for the tractor journey of farmers.

The yatra will be taken out under the leadership of Rakesh Tikait, national spokesperson of the Bharatiya Kisan Union (apolitical). The tractor journey will go on Eastern Peripheral Road to Palwal via Duhai, Dasna of Ghaziabad and Beel Akbarpur of Gautam Budh Nagar, Sirsa and then return from there. During this period, vehicles going from Gillam Budh Nagar to Beel Akbarpur and Sirsa Cut to Palwal will not be able to go on Peripheral Road from 12 noon to 3 pm. They will be diverted.

Similarly, vehicles going from Sirsa Cut and Beal Akbarpur towards Sonipat will not be able to go on Eastern Peripheral Road from 2 pm to 5 pm, police said. They will be diverted. Media spokesman of Police Commissioner Abhinendra Kumar Singh said that on Thursday i.e. Thursday, to take stock of the security arrangements in view of the tractor journey being carried out under the auspices of United Kisan Morcha, Police Commissioner Alok Kumar Singh of Gautam Budh Nagar and Additional Commissioner of Police Law- Arrangement Luv Kumar arrives at Eastern Peripheral Expressway.

The agitating farmers have been camping at the UP gate since 28 November and have also closed the Ghaziabad-Delhi carriageway of NH-9 from 3 December. These farmers are demanding the repeal of the three new agricultural laws and a new law on minimum support price (MSP) like other protesters at various borders of Delhi. Their talks with the government have reached the final stages, but no decision has been taken on repealing the laws, while the government has clarified that they are ready to discuss the amendments. The next round of talks is to be held on 8 January.

Bharat Kisan Union (BKU) state president Rajbir Singh said, “On January 26, as a dress rehearsal of our ‘Delhi Chalo’, our farmers will march a tractor on the Eastern Peripheral Expressway and enter the expressway from Dasna Interchange will do. Others from Baghpat will also join Dasna. Tractors will be parked properly and trolleys will not be part of the march. After that the tractor will go to Palwal via Eastern Peripheral Expressway and come back to Dasna. ”

He said, “Every tractor will have national flag and BKU flag. It is estimated that about 500-600 tractors will participate in this rehearsal. Our leaders have already said that if our demands are not met, we will go to Delhi on 26 January. So, in a way we are rehearsing on Thursday. “

Hundreds of tractors will travel about 19 km from UP Gate to Dasna via NH-9’s Delhi-Ghaziabad carriageway. NHAI officials said that tractor traffic of farmers will be affected on both major highways from March. He said that about 50,000 passenger cars pass through the Eastern Peripheral Expressway every day while about 80000 vehicles pass through the UP Gate route.

read this also : The Republic Day But women learning to drive tractor for Delhi march

Project Director of NHAI Mudit Garg said, “Tractors are not allowed in Eastern Peripheral Expressway and if Farmers march If ejected, traffic will be interrupted. We will talk to senior officials of the district about this. Already, farmers have made two major toll free in Palwal and Sonipat and this is also affecting revenue. It is estimated that we get around 90 lakh rupees per day from the toll, but since 25 December we are getting only about 25 lakh rupees per day. ”

Ghaziabad District Magistrate Ajay Shankar Pandey said that he has spoken to the farmers and asked them to follow the rules and regulations. Also, our committee of officials is already in touch with farmer leaders. We will also say that the police will have to deploy more to ensure that passengers do not face problems.

Farmers’ announcement – Tractor parade will be carried out on Outer Ring Road, will not create obstacles on Rajpath

Religious places to open in Maharashtra from November 16, wearing masks will be mandatory