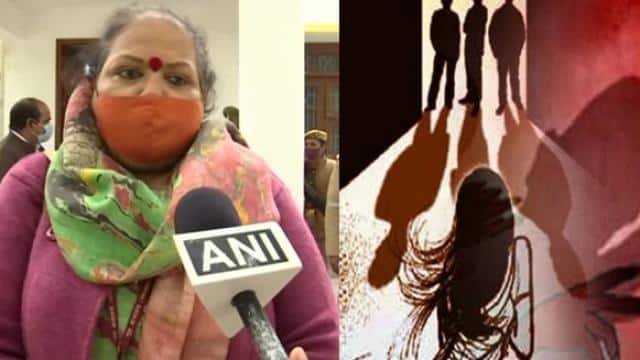 Chandramukhi Devi, a member of the National Commission for Women, visited the victim’s family on Thursday in connection with the murder of a 50-year-old woman who had gone to worship in Badaun district of Uttar Pradesh. He shared sorrow and pain with the family and took full information sitting with the police officers. However, during this time Chandramukhi Devi made a controversial statement. He questioned the gang-rape victim’s going out in the evening. His statement stirred up after surfacing in the media.

Speaking to the media after meeting the family, Devi, a member of the Women’s Commission, said, “If the woman had not gone in the evening or if a family member had been together, such an incident would not have happened.” She was called and then she came back in such a situation. “She said that I do not want to come to the conclusion that I have received today, because it is not my business.” They will get severe punishment. I have also asked the police officer to take action. Chandramukhi Devi also visited the site of the incident. He said that there has been negligence of the police in the whole case, which led to brutality with the woman. If the police wanted, the incident and the woman’s life could have been saved.

‘Not satisfied with police action’
The woman commission member questioned the police action and said that she was not satisfied with it. Describing the incident of gang rape as unfortunate, he said that the police could have saved the life of the woman and could have avoided the incident, but the police continued to smuggle in to show the incident. The woman lay 18 hours. The police delayed writing the FIR. The woman did not reach the district hospital in time. The accused were not conducted in time. Because of which such a big incident happened. Had the police been active, it would not have been such a big and painful incident. Said that the government is serious about women.

I have come to meet the victim’s family. For detailed information of the incident, I have obtained information by meeting with SSP. The CM is strict against such incidents from the beginning. We believe that the culprits will not be spared at any cost: Chandramukhi Devi, member of National Commission for Women on Badaun gang rape pic.twitter.com/J4XoLE3wRH

Know what is the whole matter of Badaun
A 50-year-old Anganwadi sahayika who went to worship at Ughaiti in Badaun district of UP was murdered after a gang-rape. The woman’s family has accused the temple maestro, Satya Narayan, and her two associates of gangrape and murder. On this basis, Ved Ram and Jaspal were arrested on Tuesday night by filing a case against the accused. The accused Mahant is absconding and four teams have been formed to arrest him. At the same time, the open negligence of Inspector Ravendra Pratap Singh in the case came to light, on which the SSP suspended the SHO based on the preliminary investigation report of SP Dehat Siddharth Verma and CO Bilsi Anirudh Singh.

PM kisan Samman Nidhi Yojna: delay in arrival of seventh installment, know what is the reason

Mercedes-Benz vehicles are getting expensive up to 15 lakh rupees, know what will be the new price