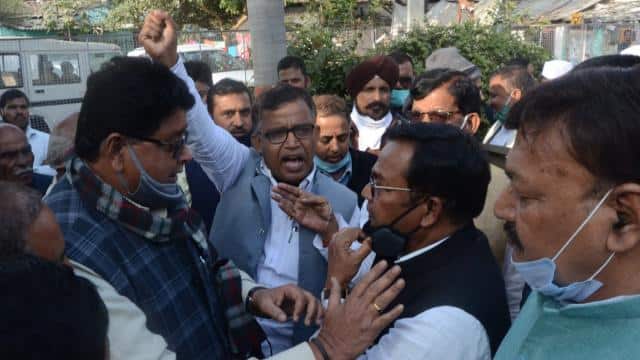 The resentment in the Congress over poor performance in Bihar assembly elections and giving tickets to outside candidates has not stopped. In the presence of Bihar Congress in-charge Bhakta Charan Das at the Sadaqat Ashram in the capital Patna on Tuesday, party leaders and workers created a ruckus and threw chairs at each other. The leaders created a ruckus, accusing them of ‘money game’ in ticket distribution and the apathy of the leaders in the elections. Those who did not get tickets were accused of ‘selling’ tickets, while the contestants were accusing their party leaders of defeating them.

Earlier on Monday, there was a ruckus at Sadaqat Ashram. Leaders like Sanjeev Tony and Shakeeluzzma, Janardan Sharma openly accused the workers of ignoring the election. When former legislator Lal Babu Lal started speaking in favor of the system, the uproar became more intense. After that, the meeting started to look neatly divided into two factions.

Bihar: Huge ruckus during Congress in-charge Bhakta Charan Das’ meeting with party workers in Patna. The party workers were angry over the defeat of Congress in elections as well as ticket distribution. (Note: Abusive language) pic.twitter.com/dB2nfYCE5n

The new in-charge gave the task of marching 15 to the Raj Bhavan to the state Congress
Bhakt Charan Das, incharge of Bihar Congress, has given the task of raising the issues of farmers to the party leaders and the Raj Bhavan gherao on this issue. Said that every leader and activist of the party should think in the interest of the party and explain how the Congress, which has been cut from its land for decades, will be strong in Bihar. Mr. Das spoke openly in the late evening meeting. He said in his address that farmers across the country are angry against the new agricultural laws. In Bihar, Congress besieges the Raj Bhavan on 15 January in support of farmers. Go among the farmers by dividing it in the Tolio. Those who have complaints with the leaders of the party should also speak openly. Their words will be considered and allegations will be discussed.

Five more deaths due to Kovid-19 in Rajasthan, 467 new cases of infection